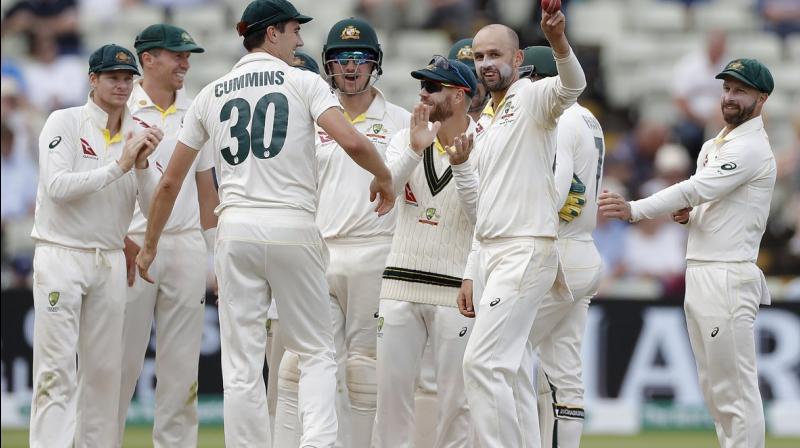 Australian spinner Nathan Lyon penetrated through England’s batting order as the home side got bundled out for 146 to lose the first Test match by 251 runs. (Photo:cricket.com.au/twitter)

Mumbai: Australian spinner Nathan Lyon penetrated through England’s batting order as the home side got bundled out for 146 to lose the first Test match by 251 runs. Australia now leads the five-match Ashes series 1-0.

After Australia’s win, the Twitterverse congratulated and tweeted various hilarious memes after the Aussies climbed to the first place in World Test Championship (WTC) points table.

Winning a test match by 251 runs after being 122/8 in the first innings doesn't happen very often. A remarkable test match for Steve Smith, and well done Nathan Lyon and Cummins. #Ashes19

What a win 👍🇦🇺🇦🇺#ashes 1-0 on too Lords . Australia you bloody beauty , sing it loud lads 👍congrats to all .

The #Ashes series now heads to Lord's with the second Test starting August 14.

Before then, Australia travel to Worcester for a three-day tour match. pic.twitter.com/jtTm5JNNW6

However, after the match, Australia captain Tim Paine said, ”I wouldn’t say surprised, thought we were up against it at on stage but we had the best player in the world at the crease. We were excellent the second innings, bat and ball. [Smith] Running out to things to say about him, probably the best Test match performance we’ve seen. Wadey I’ve seen up close at Tasmania for the last couple of years, he’s in form and a really good place. [Lyon?] Always hard to come to a Test match on day five, with the pressure on your shoulders. But we put pressure on the other end as well, Nathan took the spoils but we shared it around. This morning, our bowling was sensational. [Atmosphere] Didn’t matter where it was, we know the crowd’s going to be against us. The guys handled themselves well, and stuck to their guns.”