Sarfaraz was body-shamed after the match as one fan went up to him in a mall and asked him to look after his weight. 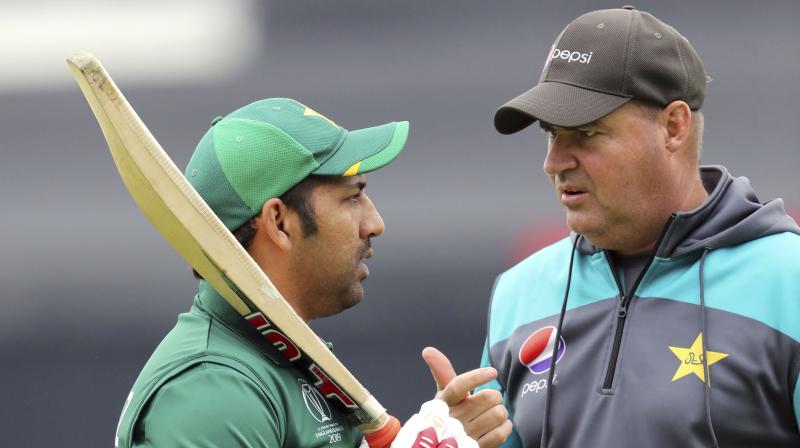 The Green Shirts finished at the fifth spot in the tournament standings with 11 points from nine matches. (Photo: AP)

London: After registering a comprehensive 94-run victory over Bangladesh, Pakistan head coach Mickey Arthur credited skipper Sarfaraz Ahmed for his composure while claiming that the behaviour towards the skipper after the match against India was "atrocious."

"I must credit our captain Sarfaraz after what he was exposed to. The behaviour towards him after the match against India was atrocious. The way he held his composure, the way he led from the front, the way his work ethics never changed, he has been an inspiration for our dressing room. Sarfaraz deserves a lot of credit for that," Arthur said at the post-match ceremony.

Pakistan lost against India by 89 runs on June 16 and as a result, the team faced severe backlash. The team went on to become the butt of all jokes and many fans criticised the players' fitness and their training regime.

Several videos surfaced on the internet, wherein fans were seen dejected with the team's performance. Various media reports also suggested that Pakistan players broke team curfew before the match against India as they went to a nearby restaurant to have dinner.

Sarfaraz was body-shamed after the match as one fan went up to him in a mall and asked him to look after his weight.

"When the video became viral, my body language was demotivated. It was not because of me. It was because of my son Abdullah who was with me at that time. That's why it hurt me even more," Sarfaraz had said about the body-shaming incident.

Pakistan Cricket Board also said that they would hold a review of the team's performance after the Cricket World Cup ends.

Pakistan won the match against Bangladesh by 94 runs on Friday at the Lord's Cricket Ground in London. Opting to bat first, the Green Shirts posted a score of 315/9 in the allotted fifty overs.

Imam-ul-Haq was the top-scorer for the team as he played a knock of 100 runs whereas Mustafizur Rahman scalped five wickets for Bangladesh.

Pakistan easily defended the total as Afridi took a six-wicket haul. The team, however, failed to qualify for the semis as they were unable to restrict Bangladesh to under seven runs.

After the match, all-rounder Shoaib Malik announced his retirement from ODI cricket. The player will continue to represent Pakistan in the T20I format.

The Green Shirts finished at the fifth spot in the tournament standings with 11 points from nine matches.