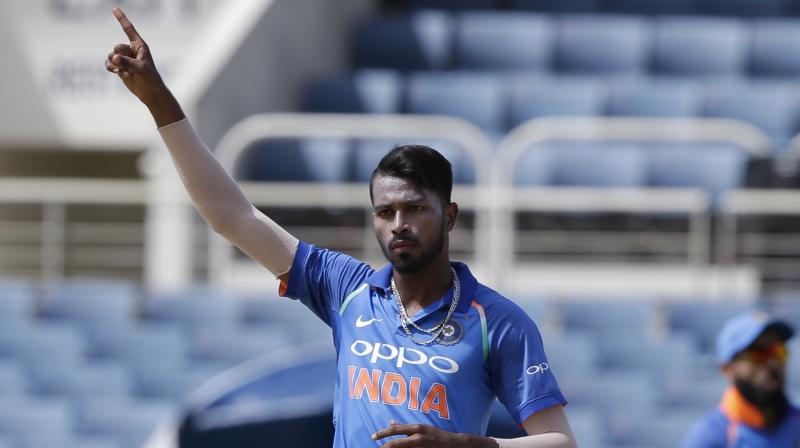 Hardik Pandya got the wicket of Evin Lewis.(Photo: AP)

West Indies resumed the match on a cautious note after they lost two crucial wickets early on. Shai Hope and Jason Mohammed are currently looking to build a good partnership as the hosts aim to score a challenging total.

The Indian bowlers have showed an improved show when compared to the first 10 overs. The Indian fielders are putting their best effort to save boundaries.

Team India got back in the game as Umesh Yadav got two crucial wickets in the 16th over, seeing off Kyle Hope and Roston Chase. Hope was looking dangerous at 46 when Umesh Yadav got the breakthrough.

This was followed by the departure of Roston Chase, who went back without scoring any runs. Later on, spin was introduced in the 20th over, as Kuldeep Yadav was brought in.

West Indies lose back-to-back wickets as Umesh Yadav strikes. Kyle Hope was the first to depart on 46, just falling short of his 50. He was followed by the departure of Roston Chase who went back without scoring anything.

West Indies got off to a decent start, barring the wicket of Evin Lewis, as the openers started the match with an attacking mindset, by going for boundaries.

WICKET! Hardik Pandya got the wicket of opener Evin Lewis just when the openers were starting to look dangerous. Captain Virat Kohli took an easy catch to see off the opener.

West Indies are off to a decent start as openers Kyle Hope and Evin Lewis are taking the team ahead. After five overs, the Windies have scored 26 for the loss of no wicket. India have already started with three bowlers, Bhuvneshwar Kumar, Umesh Yadav and Hardik Pandya

Toss: Hosts West Indies won the toss and elected to bat first, with both teams being unchanged.

Jamaica: It will be all to play for when Virat Kohli’s Team India take on Jason Holder’s West Indies in the fifth and final One-Day International here on Thursday.

After winning the last match by 11 runs, in a low-scoring encounter, West Indies will come into this match with a confidence of levelling the series 2-2. The Windies bowlers came back strongly in the last match after being restricted to 189/9 in 50 overs by Virat Kohli and co.

West Indies last won a bilateral series against India at home way back in 2006, when the Caribbean team almost dominated the Men in Blue after they won the series 4-1.

Virat Kohli has failed to produce in the last two matches, with scores 3 and 11 not looking good for the visitors. In the first two matches of the series, he had scores of 32 not out and 87.

Ajinkya Rahane, however, has been the success story for Team India’s batting. Altogether, with 297 runs, Rahane is the leading run scorer in the series comprising of three half-centuries and one century (103).

Rahane, who has also surpassed Rohit Sharma's 2011 record of most runs by an Indian batsman on Carribean soil, will look to produce another fine show in the fifth ODI.

West Indies, meanwhile will hope to keep their ICC World Cup qualification hopes alive with a series-levelling win. In August, West Indies will travel to England for a complete tour, which will potentially be their last chance to directly qualify for the ICC World Cup 2019 as the September 30 deadline nears.