South Africa lost by six wickets to India for their third successive loss in the ongoing showpiece. 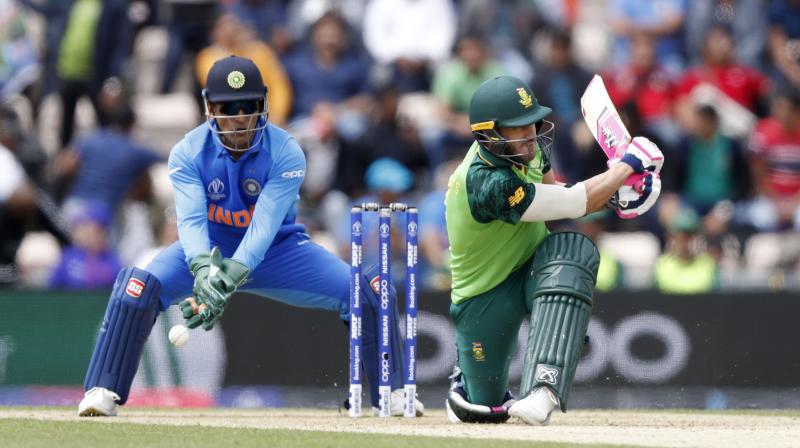 Before the disappointing result against India, South Africa crashed to a stunning defeat at the hands of Bangladesh, days after the loss to hosts England in the tournament opener. (Photo: AP)

Southampton: Under-fire South Africa skipper Faf du Plessis said his "hurting" team is trying to fight but is just not able to avoid mistakes in what is turning out to be a horror World Cup campaign.

South Africa lost by six wickets to India for their third successive loss in the ongoing showpiece.

"Ours is a change room that is hurting, trying to make sure we keep fighting but we are making mistakes all the time," Du Plessis said in the post-match presentation on Wednesday.

Reflecting on the team's performance against India, du Plessis said Virat Kohli's men put up a professional performance and the absence of injured pacers like Dale Steyn and Lungi Ngidi hurt his side.

"Their bowling was magnificent, they have got good fast bowlers and spinners. We did well to pull it back with the bat before their spinners ran through our middle order.

"Rohit (dropped twice) had a bit of luck but he did what we didn't do - get a hundred and win the game."

On electing to bat under overcast conditions and putting a mere 227 on the board, du Plessis said: "The build-up to the match, the info said, a lot of runs were scored, and the make-up of our team, with the fast-bowling resources gone, we went with spin. If we had Steyn and Ngidi, we would have the chance to attack with overcast conditions.

"(Kagiso) Rabada is a champion, haven't seen so many balls land short or go here and there. But that's how the game goes, when you aren't playing your best cricket, these 50-50 things don't go your way. (Chris) Morris too was superb, he bowled well and scored some crucial runs with the bat," he added.

Before the disappointing result against India, South Africa crashed to a stunning defeat at the hands of Bangladesh, days after the loss to hosts England in the tournament opener.