'We were lucky but not clinical', says Ross Taylor after winning versus Bangladesh

The Black Caps bowled and fielded tightly to dismiss Bangladesh for a moderate 244 at The Oval before collapsing from a commanding 160-2. 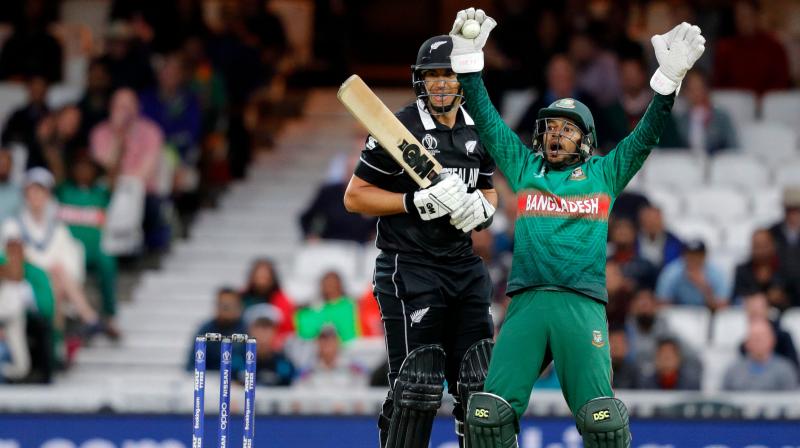 Taylor top-scored with 82 on the day he became the third New Zealander to make 400 international appearances across all formats of the game. (Photo:AFP)

London: New Zealand batsman Ross Taylor admitted his side rode their luck and did not play clinically enough in their nervy two-wicket victory over Bangladesh at the Cricket World Cup on Wednesday.

The Black Caps bowled and fielded tightly to dismiss Bangladesh for a moderate 244 at The Oval before collapsing from a commanding 160-2 to stumble to their target with 17 balls to spare.

Taylor top-scored with 82 on the day he became the third New Zealander to make 400 international appearances across all formats of the game.

“At the end of the day, I think we weren’t as clinical as we would have liked, but we got the two points which is first and foremost what we wanted,” Taylor told a news conference.

“We were put under pressure and it was nice to come out on top. I thought we bowled very well to keep them down to a below-par total and we knew if we batted 50 overs we would give ourselves a pretty good chance of winning this game but we lost wickets at crucial times.

“You’ve got to give credit to Bangladesh. They just never gave up and I think the way the crowd got into it, I thought at times I was in Chittagong or Dhaka. It was amazing to be a part of and I thought just fantastic for the tournament to have such a close game.”

Taylor was involved in a crucial incident when his captain Kane Williamson should have been run out but Bangladesh wicketkeeper Mushfiqur Rahim dislodged the bails with his arm.

“Obviously, very lucky with that one,” said Taylor. “It’s part and parcel of cricket. I don’t really look too much into it.”

Taylor was caught down the leg side by Mushfiqur off spinner Mosaddek Hossain, one of six wickets the New Zealanders lost in quick succession as they crumbled to 238-8.

But Mitchell Santner saw them over the line to secure their second victory of the tournament following a crushing win over Sri Lanka.