The incident happened in the 12th over when Mushfiqur dislodged the bails with his elbow while trying to run out NZ skipper Kane Williamson. 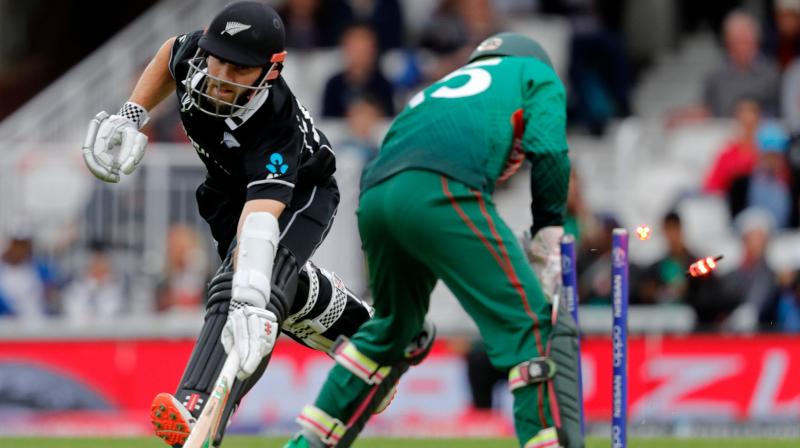 The partnership set the tone as New Zealand chased down Bangladesh's 245-run target, scoring 248 for 8 in 47.1 overs. (Photo: AFP)

The incident happened in the 12th over when Mushfiqur dislodged the bails with his elbow while trying to run out New Zealand skipper Kane Williamson, who went on to share a crucial 105-run stand for the third wicket with Ross Taylor.

The partnership set the tone as New Zealand chased down Bangladesh's 245-run target, scoring 248 for 8 in 47.1 overs.

"Mushi (Mushfiqur), I don't think we need to go after him, because it could happen to anybody because he was also trying hard to get him," Mortaza said.

"That throw was straight, and then as a keeper, it's very difficult to tell if it was straight or not. He wants to pick the ball and suddenly it hits his elbow, I guess.

"Those sort of mistakes always happen in the ground. So I don't think we should go after him."

Mortaza said his team was 20 to 30 runs shy of what could have been a winning score at The Oval.

"We were very close, a few runs short but very close. If you don't score big, you have to take all your chances.

"If we could have managed to score 20 to 30 runs more than we did it would have been different."

Bangladesh, who had defeated South Africa in their opening match, will next take on England, who also have won one and lost one.

Mashrafe said it will be a difficult task for his team to tame the hosts.

"I think England are one of the biggest sides in the tournament. It won't be easy. If we can play our best possible cricket, you never know," he said.

"I don't think we played badly today which is positive. Defending 244, everyone knows on this wicket at The Oval is not easy. We were very close.

"The batting side, we started partnerships but couldn't kick on. If we can get that right in the next match, it will be a good match."