South Africa are refusing to admit that their World Cup race is all but over with all-rounder Chris Morris telling fans to stick with SA. 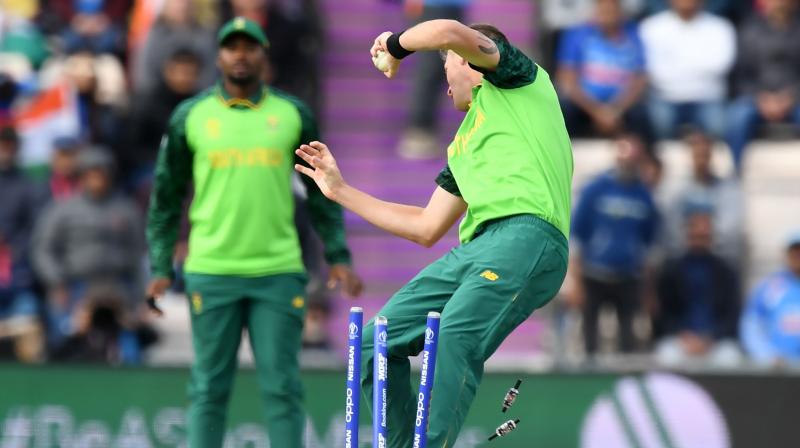 Morris said it had been a much better performance by the South Africans after their opening two losses. (Photo: AFP)

Southampton: South Africa are refusing to admit that their World Cup race is all but over with all-rounder Chris Morris telling fans to stick with the team despite a third loss inside a week.

They were beaten by six wickets by India at the Rose Bowl on Wednesday – leaving the side with a massive task if they are to get through to the semi-finals.

South Africa were beaten in the tournament opener by England on Thursday and were then upset by Bangladesh on Sunday. The defeat by India means they would realistically need to win all of their remaining six round-robin matches to stand any chance of progressing to the last four.

“Stranger things have happened at the World Cup before,” said Morris after top scoring for South Africa with 42 as they struggled to 227-9.

India reached the target with two and half overs to spare.

“Obviously we are disappointed to lose three games so far but we ask the fans at home to stay with us and back us as much as you can and we will try and perform for you,” he told a news conference.

Morris said it had been a much better performance by the South Africans after their opening two losses.

“Our body language was not there in the first two games but today we addressed that. Overall I thought we were quite good,” he said.

“A few opportunities came our way but then didn’t go our way.

“At the end of the day if a good Indian team took so much time to get to the 227 target, it shows we bowled well. Maybe with a bit of luck, things could have gone our way.

“The guys know what is needed to be done. We are a bit disappointed and angry. But when the sun comes up tomorrow, we take on our next opponents. It is as simple as that,” Morris added.

South Africa now have a four-day break before facing West Indies in Southampton on Monday.