Opting to field, the Black Caps bowled beautifully to restrict Bangladesh to 244 in 49.2 overs at the Kennington Oval. 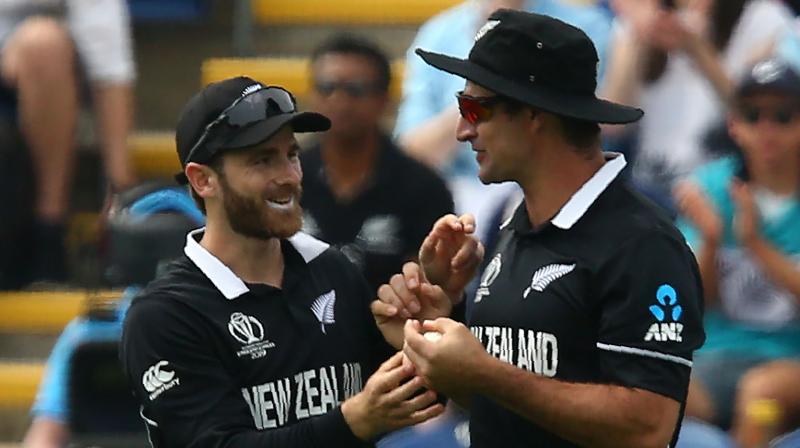 The skipper was delighted that his side held on to the momentum and ended on the winning side. (Photo: AFP)

London: Captain Kane Williamson urged his batsmen to play more responsibly after a string of soft dismissals pushed New Zealand on the brink of defeat against Bangladesh.

The Kiwis though got their act together to eke out a two-wicket victory.

Opting to field, the Black Caps bowled beautifully to restrict Bangladesh to 244 in 49.2 overs at the Kennington Oval.

While chasing, New Zealand lost two early wickets but looked comfortable at 160 for two. However, the wickets of Williamson (40) and Tom Latham (0) in the same over threw the Black Caps a little off track. Ross Taylor steadied the ship with a 91-ball 82 before Mosaddek Hossain dismissed him.

Cruising again, at 218 for five, the loss of all-rounders Colin de Grandhomme and Jimmy Neesham in consecutive overs left tail-enders Mitchell Santner and Matt Henry with a tricky task.

"Nice to get across the line, I thought the first innings was outstanding. The fielding was brilliant throughout by both teams. We thought 250 could be a competitive score and we just needed to keep wickets in the hand," Williamson said after the win.

"It wasn't a clinical effort with the bat, but it was nice to get over the line. There were a few soft dismissals that we need to address," he added.

The skipper was delighted that his side held on to the momentum and ended on the winning side.

"It was a great experience to have and these things happen and they go down the wire. It was nice to hold on as momentum shifts tend to happen in tournament cricket. I thought all the guys adapted to their role very well."

Taylor, who celebrated his 400th international appearance with match-winning innings, admitted his team needed the luck to stop the game from slipping away from their fingers. Williamson, Taylor and Neesham all of them survived run-out scares.

"Obviously we were very lucky with the first one with Kane and then I think I was in by one centimetre and I think Jim was in by half a centimetre. You know, we talk about innings and that, and it's part and parcel of cricket," Taylor said.

"I always do love batting with Kane, and he's great to be batting with, but we had a bit of luck. We were put under pressure, and we came out with the right result and I think that bodes well for the tournament."

The 35-year-old said emerging on the winning side under pressure will help New Zealand prosper in the tournament.

Taylor admitted that it felt more like a game being played away from home than on neutral territory gave the huge Bangladeshi support in the crowd.

"Bangladesh fought all the way to the end and I think the way the crowd got into it, I thought at times while we were out there, I thought I was in Dhaka or Chittagong. It was amazing to be a part of and I thought just fantastic for the tournament to have such a close game."

"It was nice to get the boys over the line. It got a bit tighter than we would have liked but we'll take the win and move on to the next game," Santner said.

The left-arm spinner helped build up pressure on the Bangladesh batsmen which led to the run out of Mushfiqur Rahim after a dangerous half-century partnership with captain Shakib Al Hasan.

"The wicket was probably a bit slower than we thought, so my role throughout the middle there was to change my pace and bowl good areas."

"As a spinner, if you're tying down a subcontinental team you must be doing a pretty good job. Shakib and Mushy were going pretty well for a while."

Santner is expecting spin to play a significant part in the tournament.

"We've already seen that if it doesn't swing early and there are some used wickets, spinners have done a pretty good job. It's going to be key to bowl teams out high-scoring games in on the flat surfaces that you expect here," he said.