The 27-year-old bespectacled all-rounder, who arrived at the crease with his side in danger of snatching defeat from the jaws of victory. 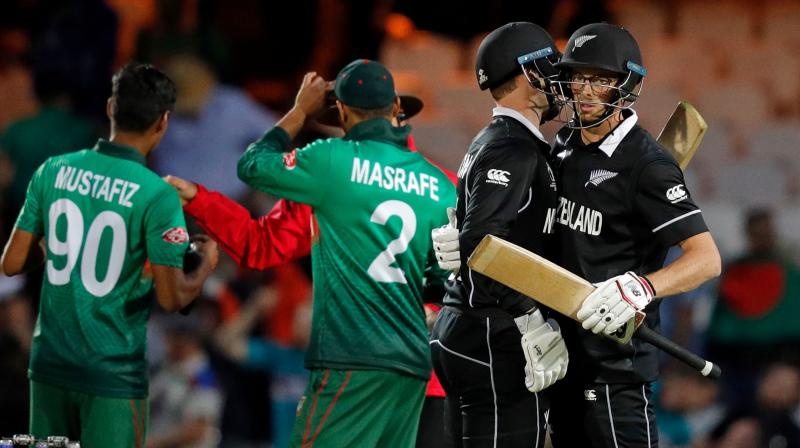 It was not the first time that Santner demonstrated his calmness under pressure in one-day internationals. (Photo:AFP)

London: Playing only his second Cricket World Cup match, Mitchell Santner needed his steely nerves to shut out the noise from the large Bangladesh crowd at the Oval and guide New Zealand to victory on Wednesday.

The 27-year-old bespectacled all-rounder, who arrived at the crease with his side in danger of snatching defeat from the jaws of victory, held the tail together and hit the winning runs with 17 balls remaining in the match.

Santner scored an unbeaten 17 off 12 balls and ensured the Black Caps advanced from 218-6 through to their 245-run target with his lofted off-drive from Mustafizur Rahman taking them past Bangladesh’s total for two crucial competition points.

“Bangladesh were on top there for a while and you can hear it through the crowd,” Santner told reporters. “I think a big thing is the communication between you and your partner.

“We were just trying to keep it about playing ball by ball.

“If they bowl a good ball then you can just try and get your ones and twos and go from there.”

Kane Williamson’s side restricted the Tigers to 244 and with Williamson (40) and Ross Taylor (82) taking them through to 160-2 in the 32nd over, the 2015 World Cup finalists looked on course for an easy win.

Bangladesh’s slow bowlers, however, fought back as New Zealand lost wickets at crucial junctures until Santner’s 20-run stand with Matt Henry pushed them to the cusp of victory.

“I thought we were cruising there for a while, we were going to get that two or three down,” Santner said. “But credit to the way Bangladesh bowled, they kept fighting to the end.”

It was not the first time that Santner demonstrated his calmness under pressure in one-day internationals.

Last year he smashed 45 not out from 27 balls to guide New Zealand to a three-wicket win in Hamilton against England, and followed that up with scores of 63 not out in a six-wicket loss at Mt. Maunganui.

His run out for 41 in the next game in Wellington probably cost the hosts a win in the five-run loss while he top-scored again with 67 in the fifth game against Eoin Morgan’s side.

“You want to perform on the biggest stage and there’s none bigger than the World Cup,” said the left-arm spinner, who missed most of 2018 with a knee injury.

“It was nice to get the boys over the line. It got a bit tighter than we would have liked but we’ll take the win and move on to the next game.”