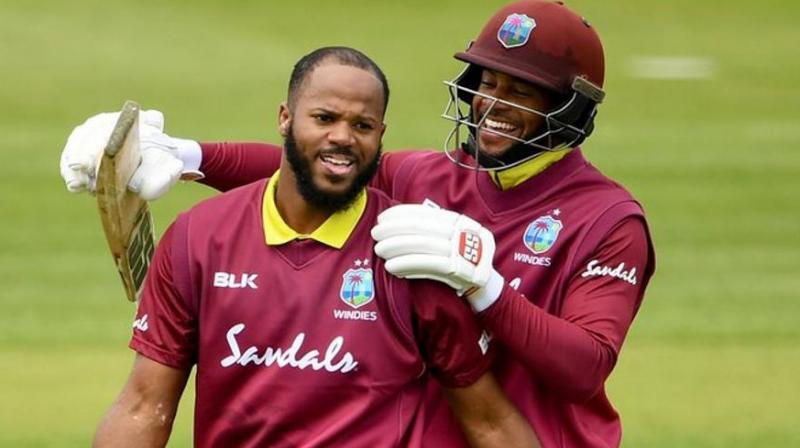 Campbell was not named in the West Indies squad for the upcoming World Cup, but the player said he was glad to grab the opportunity he got. (Photo: TWitter)

Dubai: West Indies opener John Campbell after scoring his maiden limited-overs century in the Tri-nation series against Ireland on Sunday, said that words cannot express how he feels and the results are a testament to the hard work put in by him.

"Words cannot express how I feel right now. It's been a long time coming. Since the past few months, I've been putting in the hard work. I guess I can say I'm reaping the success now," International Cricket Council (ICC) quoted Campbell as saying.

Campbell,25, played a knock of 179 runs off 137 balls in the match against Ireland and he, along with fellow opener Shai Hope, recorded the highest-ever opening ODI partnership of 365 runs.

West Indies posted 381 runs on the board for the loss of three, putting pressure on Ireland which failed to live up to the challenge and ended up with 185 runs.

Campbell acknowledged Hope's contribution in the highest-ever ODI partnership and also lauded the bowlers for not letting Ireland back into the match.

"I was just thinking about the team and trying to get the team as much runs as possible. Shai was great. He kept talking to me and I enjoyed every moment at the crease. It was a great way to start the tournament... a very good win for the team ... The bowlers did an excellent job to limit them to under 200," he said.

Campbell was not named in the West Indies squad for the upcoming World Cup, but the player said he was glad to grab the opportunity he got.

West Indies next takes on Bangladesh in the Tri-nation series on May 7.