Sports   Cricket  06 Mar 2018  Indian pacers get pat on back from McGrath
Sports, Cricket

Indian pacers get pat on back from McGrath

As the mushrooming T20 leagues proving to be more lucrative, there is a growing concern over the future of Tests. 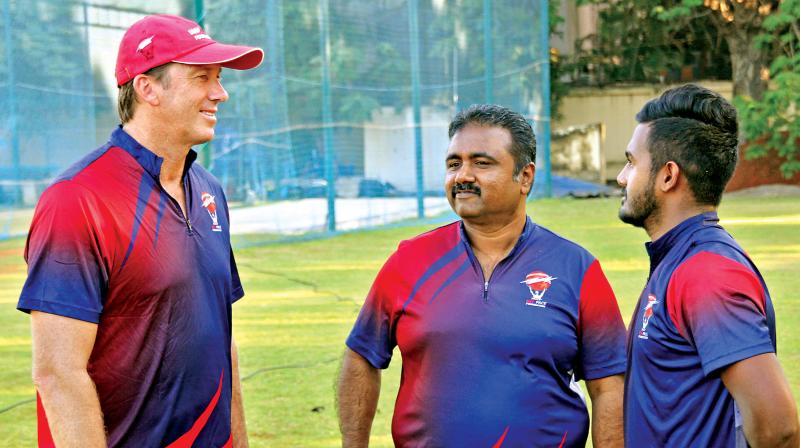 Chennai: For Glenn McGrath, Test cricket is still the ultimate. But the former Australian pacer, who holds the record for the most Test wickets (563) by a fast bowler, knows not every player would say the same. As the mushrooming T20 leagues proving to be more lucrative, there is a growing concern over the future of Tests.

“Some players are more suited to the shorter version and there is a lot more money in T20 leagues. Hopefully, Test cricket is still held in high regard. In the last 8-12 months, the quality of Test cricket has been very impressive. I would say it’s alive and kicking,” said McGrath, who is in the city to supervise MRF Pace Foundation camp.

The 48-year-old also spoke on variety of subjects.

On Ricky Ponting’s suggestion that cricket needs different coaches for different format:
Ponting surely knows what he’s talking about. There are three formats in world cricket now and different coaches can bring in different tactics and plans. Maybe, that’s the way forward.

On India selectors fast-tracking Jasprit Bumrah to Tests:
I wasn’t surprised with his inclusion in Tests. He is a quality bowler. He has got unique action. He is bowling well in the shorter version. His presence gives a great depth to Indian Test team. You can’t win Test matches if you are not taking 20 wickets. If you take 20 wickets consistently, you are in a good position to win matches. The bowlers that India have at the moment are looking good with Bhuvneshwar Kumar, Mohammed Shami and Bumrah bowling in tandem. There are positive signs. I don’t think South Africa are quite a strong Test side they used to be. But you have to give credit to India for bowling well there.

On India’s chances in England:
It’s about getting used to those conditions. In England, you have to hit the right length. Pitches in England will offer seam movement, but the wickets are not as fast as Australian tracks. If Indian bowlers can adapt well in using the Duke balls, I am sure they will enjoy bowling there.

Do India stand a chance in Australia? My prediction for the India-Australia Test series is another whitewash in favour of Australia.

On Aussie left-arm pacer Mitchell Starc:
I think he is the best fast bowler now. When he swings the new ball, he is the most dangerous. Starc takes the pitch out of the equation as he always bowls attacking line. He can do well everywhere. Trent Boult, Tim Southee and Kagiso Rabada are also top contenders.

On MRF trainee Kamlesh Nagarkoti:
He should consider the IPL contract as a bonus. He is young and a big career is ahead of him. He should stay focused and work hard. We have seen a few talented players fading away after an IPL high. It’s tough getting to the top, but tougher staying there.

The story of Nathu Singh (another MRF trainee) is a lesson for the IPL aspirants. He hit the IPL jackpot in 2016 and his stakes fell sharply next year and now he doesn’t have a contract.

He has realised his mistake and now back to the grind. But it’s not going to be easy for him.