Bating first in New Zealand ODIs is always tricky because the freshness of the day, leads to a lot of movement. 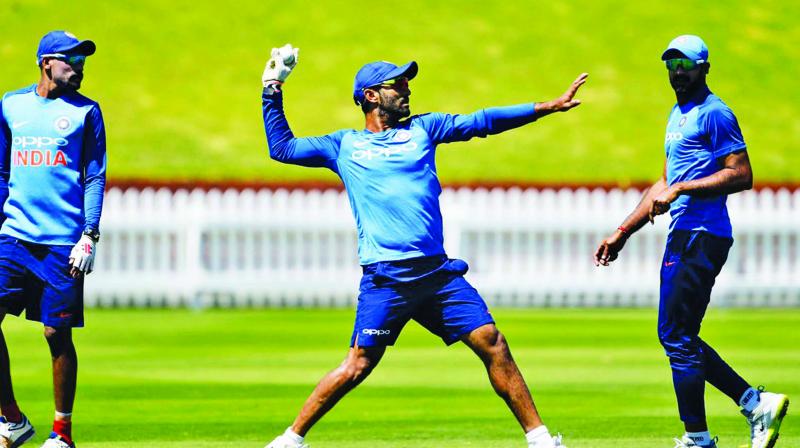 India team players during a traing session in Wellington ahead of the first T20I. (Photo: Twitter)

Team India are in a position where they would love to be 114 days before the World Cup begins on May 30. Their comfort is also reflected in the advance odds on them coming down quite rapidly from around 6 to 1 a couple of months ago to a firm second favourite at about 3.33 to 1, behind England at 2.25 to one. It must appear a bit unusual that England, a team that has never won the World Cup and in fact any ICC multilateral event, should be installed the firm first favourite. Such a line of thought only makes Team India’s chances seem a few shades better.

The unpredictable nature of the limited-overs game precludes one from declaring India as the real cricketing favourites for the World Cup, although the usually reticent Sachin Tendulkar has made so bold as to do just that. He believes India are the favourtites and he doesn’t speak like Glenn McGrath whose only prediction has been ‘5-0’ on any series involving Australia. But ‘Pigeon’ has not been known for his flashy ODI predictions even though his home team Australia are the defending champions.

What gives rise to the birth of hope that Team India are on the right path is their performance in the last ODI in Wellington, New Zealand. They had wrapped up the series promptly by the third ODI at Mount Maunganui itself but then complacency had set in so deeply and so quickly that they were humbled in the fourth ODI at Seddon Park, Hamilton. The final one at the Westpac Stadium was a real test because Trent Boult had rediscovered his mojo, with his deep and late swing, a cocktail of movement at pace with which he had destroyed India’s batting once and was threatening to do so again.

Bating first in New Zealand ODIs is always tricky because the freshness of the day, leads to a lot of movement. Where Rohit Sharma’s Team India were most impressive was in recovering from that precipitous fall to rise like the Phoenix despite another early collapse. Shaping recoveries within the confines of the 50-vers game takes a lot of character and enetrprise. The experienced hand of Ambati Rayudu was instrumental in a total recovery and he did have good support from the young Vijay Shankar.

The one who turned the recovery around and made it grand was Hardik Pandya, the man in the shadow of humiliation after his unwarranted comments on the Koffee with Karanshow. Despite what he thinks of women and how despicably he considers them as ‘prey’, there wasn’t too much of a doubt over his ODI capabilities as an impact player who could contribute with bat and ball. His attack on the end overs enabled India to put a total on the board that proved too much for the Kiwis. This does great credit to our seamers who have all along proved that there is no substitute to moving the ball.

The balance in the attack is what could make Team India formidable in the 50-overs format. The wrist spinners have spun their magic time and again in putting the brakes in the middle overs, mainly by picking up wickets as batsmen charged at them. The ability to turn the ball both ways with the googly or the wrong ‘un to buttress the leg break and the chinaman is what distinguishes India’s ODI spin twins, Yuzvendra Chahal and Kuldeep Yadav. They become even more potent in larger grounds as batsmen often hit in the air against the spin and fail to clear the ropes.

The last couple of ODIs were in conditions that could possibly exist in England in the early part of the summer. The movement of the ball could be less though even with the white Dukes ball as the instructions would be to prepare generally dry pitches for ODIs as we saw in the 2017 summer when the Champions Trophy was played. However, even if the atmospheric conditions were to be conducive to a lot of swing and the opponents do get in a couple of early strikes, Team India knows might have learnt how to fight back in such an eventuality. And then Virat Kohli will be there around the top of the order as an insurance against a total collapse like the one in the fourth ODI.

There is some way to go for all the slots to be finalised. But it would be a pity if Rishabh Pant were not to be one of the reserve batsmen for the World Cup. We know Dhoni is right up there as the resourceful gloveman and middle order batsman capable of lending a steady hand and a wise head. But to have Pant handy for a late middle role might be a thought. From a study of recent form, it would be fair to say the batting lineup could be more challenged than the bowlers, which is a very pleasant change for Indian cricket in its history. Therein lies the potency to go for the World Cup, a potential third for India behind Australia’s five.