Seifert's knock had seven fours and half a dozen sixes, setting the tone for a big total. 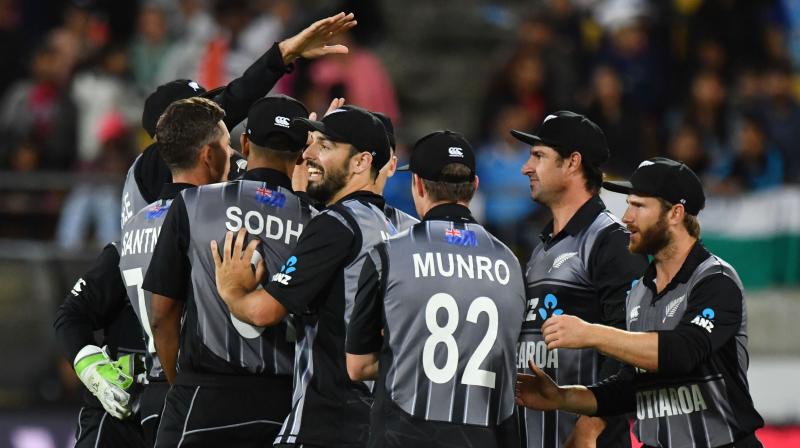 Wellington: A below-par India slumped to their worst ever defeat in T20 Internationals as New Zealand outclassed the visitors in all departments to win the first match of the series by a comprehensive 80-run margin here Wednesday.

With the crack opening pair of skipper Rohit Sharma (1) and Shikhar Dhawan (29) departing within the Powerplay overs, the chase became a difficult one and India were all out for 139 in 19.2 overs.

Mahendra Singh Dhoni (39 off 31 balls) did play his part but it was always an impossible chase with wickets falling at regular intervals at the other end. India had never lost a T20 International by 50 or more runs prior to this match. India's previous worst was a 49-run loss to Australia back in 2010.

"We failed to get a good partnership. 200 was never going to be easy to chase," said Rohit in the post-match presentation.

Senior pacer Tim Southee (3/17 in 4 overs) had the best figures among the bowlers and the best delivery of the match was bowled by Lockie Ferguson, who yorked Dhawan.

They kept the batsmen under tight check and for some like World Cup aspirant Rishabh Pant (4, 10 balls), it was a frustrating little stay in the middle and he simply couldn't get going.

On a pitch where Indian spinners Yuzvendra Chahal (1/35 in 4 overs) and Krunal (1/37 in 4 overs) went for plenty, the Black Caps slow bowlers literally tightened the noose on the visitors.

While Pant didn't do his chances any good, Vijay Shankar (27 off 17 balls) impressed during his little cameo but would need to do more in order to book a place in that World Cup bound squad.

The Pandya bothers -- Krunal and Hardik -- endured a contrasting day.

While Krunal (he also scored 20 off 18 balls) had an okay outing, Hardik would quickly like to forget the nightmare (2/51 in 4 overs and 4 runs) before India play the second match of the series in Auckland on Friday.

Earlier, Seifert, whose previous best score in T20 Internationals happens to be 14, was promoted to open alongside Colin Munro (34 off 20 balls) and they added 86 runs in only 8.2 overs in a whirlwind start.

Seifert's knock had seven fours and half a dozen sixes, setting the tone for a big total.

Seifert showed the intent straightaway as he gave Bhuvneshwar Kumar the charge, picking the knuckle ball early, dispatching it over mid-wicket for a six. The next shot was a four as he stood and hammered past the bowler.

With Munro hitting Khaleel Ahmed (1/48 in 4 overs) for two successive sixes, New Zealand were off to a blazing start scoring 44 off the first four overs.

Seifert was lucky to survive when Dhoni dropped a sharp chance after the batsman had edged one off Krunal.

But he promptly put the next delivery into the stands, moving across towards off and sweeping it over backward square leg.

There weren't any signs of overt footwork but he shuffled enough inside the crease to make room for the big shots and in the process disturbed the line and length of the bowlers.

When Hardik drifted on the leg stump, he was flicked behind the square and when he pitched wide outside off-stump, he was lofted over the cover point region.

In Hardik's next over, Seifert again hit the bowler for a boundary and a flicked six. In between, his elder brother Krunal was switch hit for a boundary.

The elder Pandya finally got a breakthrough when Munro was caught in the deep off Vijay Shankar.

But Seifert never let the momentum drop and hit two more sixes off Krunal, who just kept on pushing the ball through a flatter trajectory.