Rahul Dravid called the triumph as a major victory on a personal level. 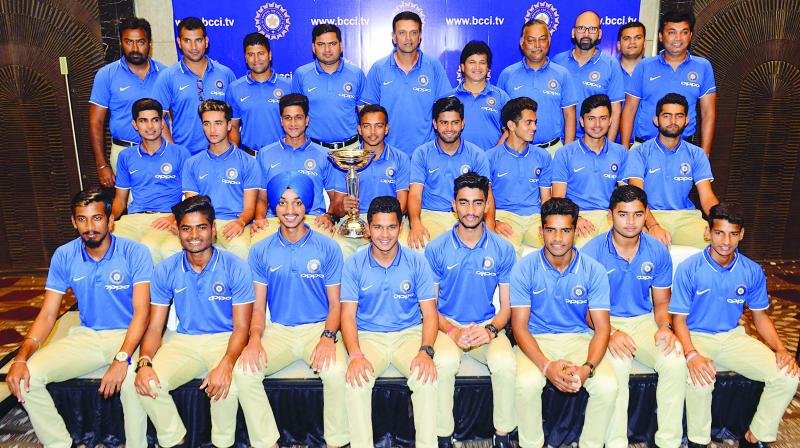 India’s U-19 team pose at the BCCI reception in Mumbai. (Photo: Rajesh Jadhav)

Mumbai: Whether it is Shubhman Gill’s resounding semi-final century or Majot Karla’s ton in the final, the Indian colts have left a mark in the U-19 World Cup with their swashbuckling performance. They certainly carried forward the confidence from New Zealand to India as they addressed a swarm of reporters here with coach Rahul Dravid after arriving from the Antipodes.

The tournament certainly threw up a bunch of heroes who pulverised opponents into submission. Rarely has cricket witnessed such a flawless show from one team at an ICC event.

Dravid called the triumph as a major victory on a personal level. “The real satisfaction for me has been the process that has been followed over the last 14-16 months. I think just the whole preparation and planning that has gone into developing under-19 players, and not necessarily players in this World Cup, is a good process that we’ve put in place,” said the former Indian skipper.

Now the uphill task for these young guns will begin and Dravid is no stranger to it. “The challenge and the hard work really start from here; we had a couple of conversations about it. When we were there they showed a rerun of the 2012 final and I started checking upon a few things. It is interesting; the result of that match is India beat Australia but six years down the line only one of those boys has played for India while 5-6 of them went on to play for Australia,” he said.

Prithvi Shaw took charge of the team last year when the side travelled to England for a five-match ODI series in which they handed a whitewash to the hosts. He has now led the team to another unbeaten trip to New Zealand for a more famous trophy. “We have brought the World Cup back and everyone including the support staff have worked hard and the results show,” said the Mumbai lad.

Kamlesh Nagarkoti and Shivam Mavi were as lethal in the tournament as the duo of Wasim Akram and Waqar Younis. They attracted huge bids from the Indian Premier League franchises. The plan was very simple for the pair.

One had to focus on the wickets and the other was in charge of checking the run flow.