Warne made the announcement during the third Test between Australia and New Zealand at the SCG here. 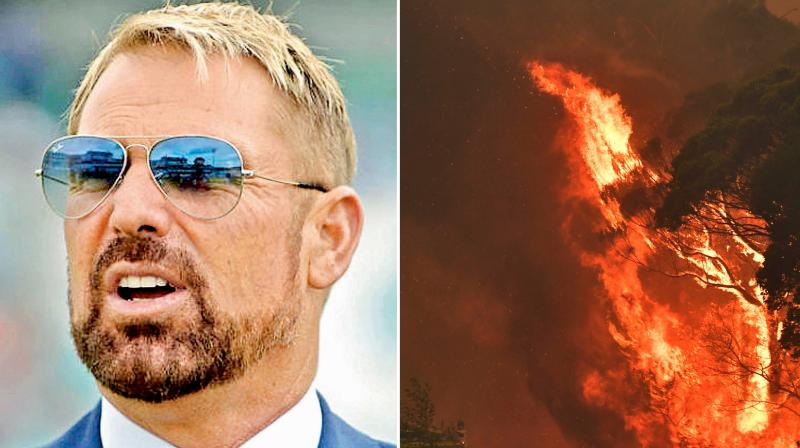 Spin legend Shane Warne on Monday said he has decided to auction his Baggy Green cap to raise funds for the devastating bushfire victims of Australia. (Photo:File/AP/PTI)

Sydney: Spin legend Shane Warne on Monday said he has decided to auction his Baggy Green cap to raise funds for the devastating bushfire victims of Australia.

Warne made the announcement by posting a statement on his twitter handle during the third Test between Australia and New Zealand at the SCG here.

"The horrific bushfires in Australia have left us all in disbelief. The impact these devastating fires are having on so many people is unthinkable and has touched us all. Lives have been lost, homes have been destroyed and over 500 million animals have died too," he said in the statement.

"Everyone is in this together and we continue to find ways to contribute and help on a daily basis. This has led me to auction my beloved baggy green cap (350) that I wore throughout my Test career.

"I hope my baggy green can raise some significant funds to help all those people that are in desperate need," the 50-year-old former leg-spinner added.

Warne has joined a growing list of cricketers, who are raising money for the bushfire victims.

Australian players Chris Lynn, Glenn Maxwell and D'Arcy Short have already announced that they will donate AUD 250 each for every six they hit in the ongoing Big Bash League (BBL) to support bushfire victims.