Australia quickly wrapped up victory after dominating with the bat first and then sweeping away the tourists in a devastating bowling spell. 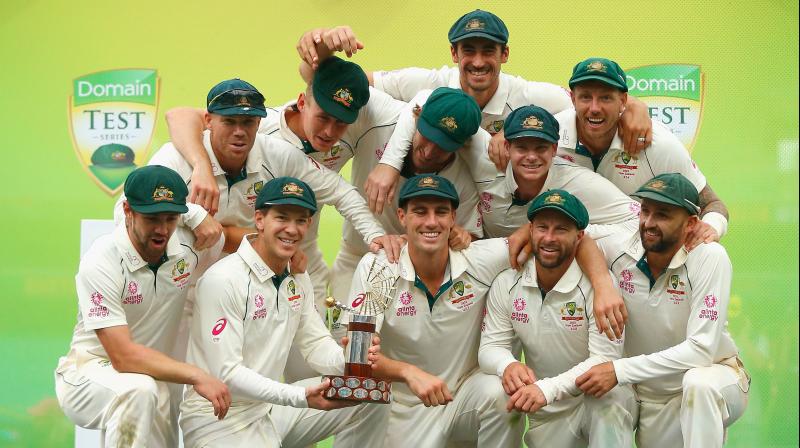 Australia closed out its home test season in emphatic fashion by crushing New Zealand by 279 runs in the third test and completing a 3-0 series sweep over the International Cricket Council's No. 2-ranked Test team. (Photo:AFP)

Sydney: Australia closed out its home test season in emphatic fashion by crushing New Zealand by 279 runs in the third test and completing a 3-0 series sweep over the International Cricket Council's No. 2-ranked Test team.

Australia quickly wrapped up victory on the fourth day at the Sydney Cricket Ground on Monday, first dominating with the bat and then simply sweeping away the tourists' batsmen in a devastating bowling spell in the afternoon.

David Warner scored 111 not out and shared century partnerships with Joe Burns and Marnus Labuschagne as Australia built a 416-run lead before declaring at 217-2.

Nathan Lyon then claimed his second five-wicket haul in as many days and Mitchell Starc took three wickets as New Zealand was dismissed for 136, its lowest innings score of the series.

Warner was at his counter-punching best in bringing up his 24th test hundred and fifth at the SCG shortly after lunch and celebrated with his customary leap, before kissing the badge on his helmet and raising both arms to his home crowd.

Labuschagne (59), with an Australian record 895 runs in five tests this southern summer, continued to accumulate quickly and reached his half century off 64 balls with four boundaries before holing out in the deep off Matt Henry, prompting the declaration by Paine.

New Zealand received a rare bonus this series with Australia incurring a five-run penalty for running on the pitch late in its innings. The decision by umpire Aleem Dar that Warner and Labuschagne were not veering off the pitch quickly enough while running between wickets seemed harsh on the hosts. The five runs were subtracted from the victory target for New Zealand which had stood at 421.

Not that Australia needed that many runs, with the bowling group ending New Zealand's resistance inside 48 overs.

Starc (3-25) had opener Tom Blundell (2) caught by a diving Lyon at point, before trapping captain Tom Latham (1) LBW in his next over to have the tourists at 4-2.

Lyon (5-50) was bought into the attack and had Jeet Raval and test rookie Wayne Phillips caught behind by Tim Paine in consecutive wicket maidens to have the tourists at 27-4 at tea.

Pat Cummins produced the best ball of the match, a delivery which straightened off the pitch and hit Ross Taylor's (22) off stump, but not before the 99-test veteran became the highest run-scorer in the history of New Zealand test cricket when he surpassed former captain Stephen Fleming's 7,172 runs.

Colin de Grandhomme and B.J. Watling then combined for a 69-run partnership for 23.3 overs to delay Australia's push for victory.

Allrounder de Grandhomme showed good attacking intent and reached his eighth test half century with a six off Lyon, before he lofted his next delivery to Burns in the deep and was out for 52.

The end then came quickly with Todd Astle spectacularly caught by a diving James Pattinson at deep mid-wicket off Lyon for 17, before Starc bowled Greg Somerville (7).

Lyon sealed the win with his 10 wicket of the game, ending Watling's 2 1/2-hour rearguard of 19 off 108 balls when Cummins took a catch on the legside. He'd never taken a five-wicket haul at the SCG until this test  now he's done it twice.

Henry didn't go out to bat because of a thumb injury sustained in the field on the first morning of the test.

Australia resumed Monday at 40 without loss, with Warner and Joe Burns adding 67 runs in 13 overs before legspinner Astle made the breakthrough trapping Burns LBW for 40.

After three scores in the 40s this series, Warner was in a typical upbeat mood as he completed his 31st test half-century off 82 balls with four boundaries.

The hosts set up its dominant position on the back of its first innings of 454, led by Labuschagne's maiden double century and fourth hundred in five matches this summer, before bowling New Zealand out for 251.

Australia won the first at Perth by 296 runs and second test at Melbourne by 247 runs.

Scoreboard on the fourth day of the third Test against New Zealand at the Sydney Cricket Ground on Monday: