The whiff of ‘achhe din’ is unmistakable

Winning away from home has always posed the severest challenge for India’s cricketers. 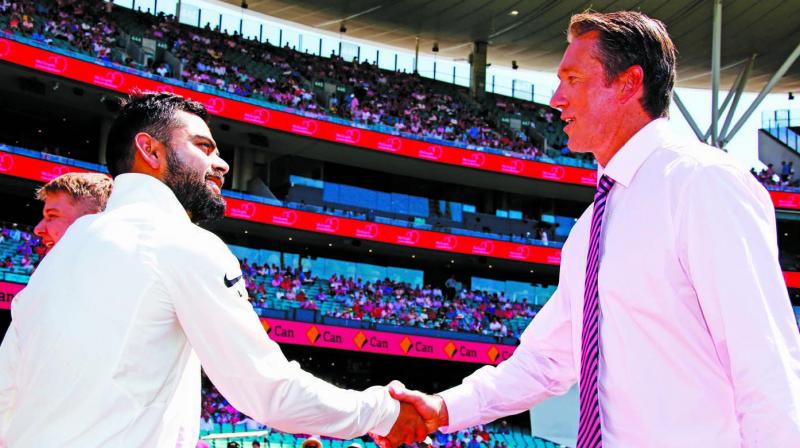 With two days remaining, Australia will need a Herculean effort from its beleaguered players, or extraordinary benevolence from the weather gods, to save the final Test. Indeed, presumptuous as this may sound, India will win their first-ever series win Down Under when the match finishes on Monday.

So chroniclers of Indian cricket history can start hunting for appropriate encomiums and sharpening their pencils to write reams on this event, which is as historic as the twin victories (over West Indies and England) in 1971, and against Pakistan in 2004.

Winning away from home has always posed the severest challenge for India’s cricketers. True, this was a below par Australian team in the absence of Steve Smith and David Warner. But that should not take away any from the performance of the Indians.

As highlighted in this column earlier, week Australian teams have either beaten India (1977-78) or held their own as in 1985-86. The fact that a series win Down Under will come after 71 years tells its own story of the hardship quotient involved in achieving this.

What’s been different this time? A fearless mindset coupled with strong tactical planning and physical training is obviously integral to any such success. But in itself these may not be enough. Past teams, particularly in the last two decades after the frequency of tours to Australia rose, lacked nothing in intent to succeed.

The biggest gain — especially playing overseas — in the past couple of years has been the bowling. India now have a potent and balanced attack which can bowl the opposition out twice on all kinds of pitches in all conditions.

However, even the sterling performance of the bowlers had not helped win the series in South Africa and England, where they were badly let down by the batting. Against Australia’s formidable bowling, the batsmen came good this time, which changed the script.

Three centuries and 521 runs in four Tests so far, Pujara’s contribution in a winning cause overseas will have to be clubbed with those of Sunil Gavaskar and Dilip Sardesai in West Indies (1971), Dilip Vengsarkar in England in 1986, and Virender Sehwag and Rahul Dravid in Pakistan (2004).

Just a whit behind has been Jasprit Bumrah — and that only because Australia’s batting, as mentioned earlier, has been fragile. I venture, however, that the tall fast bowler’s awkward action, hot pace and splendid control, would have tested even Smith and Warner.

But while Pujara and Bumrah have been the stellar performers, India’s domination in the series comes from important contributions made by several others: Kohli, Rahane, Pant, Agarwal and Vihari in the batting, Shami, Ishant, Ashwin, Jadeja and Kuldeep in the bowling.

In some cases, this may not be necessarily reflected in plain stats. For instance, Vihari hasn’t scored too many runs, but the amount of time he spent in the middle, particularly as makeshift opener, was crucial to the team cause.

The only disappointments have been M Vijay, K.L Rahul and to an extent Umesh Yadav. Not everybody can click, as the history of cricket shows, so this is hardly calamitious. But it does put the onus on these players to recover their mojo if they have to hold on to their places.

Look for the big gains from this tour, it will have to be the performance of the youngsters. Everybody knows how good Kohli, Pujara, Shami and Ashwin are, so their success, while deserving of accolades, is no real surprise. Bumrah capped his first year in Test cricket in a manner which suggests he could be a major-domo in the years to come. Agarwal impressed thoroughly with his technique, style and fluency as an opener. Kuldeep, though he will be used selectively, is a match-winner, and in Pant, India have found a smash-hit wicket-keeper batsman though he must improve his glove-work.

The next Test series is after the World Cup in June-July. How these players — individually and collectively — sustain form, zest and momentum will determine future success. But the whiff of achhe din is unmistakable.