Bhuvneshwar Kumar finished with figures of 4 for 87 but missed out on a five-for on Day 1 of the 1st South Africa vs India Test. 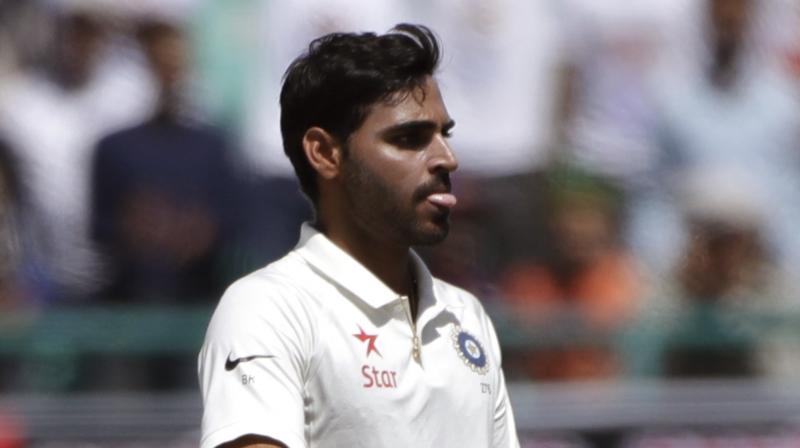 While India are struggling at 28 for 3, after dismissing South Africa for 286, Bhuvneshwar felt that the game is still pretty evenly poised. (Photo: AP)

Cape Town: Indian pacer Bhuvneshwar Kumar admitted that the bowling attack gave away 25-30 runs too many as South Africa reached 286 in their first innings despite being reduced to 12 for 3 within the first half an hour.

"If we want to be hard on ourselves, then yes we did give away a few too many runs to South Africa. I think they scored 25-30-odd extra runs. In every hour of play, there were 2-3 overs, where we gave away easy boundaries. That is an area we can improve on," Bhuvneshwar said at the end of the day's play.

South Africa maintained a run-rate of over four runs per over before ending at 3.90 in 73.1 overs.

"It is a concern for us. During the break also, we were talking about bringing the run-rate down because in Test cricket four runs per over is a lot. This is something we want to improve when we bowl in the second innings but overall we are happy with the lines and lengths we bowled," he added.

Bhuvneshwar finished with figures of 4 for 87 but missed out on a five-for as Shikhar Dhawan dropped Keshav Maharaj (then on nought) at slip. But the seamer is not at all disappointed.

"No, I am not disappointed for not taking a five-wicket haul. This is part of the game and there will be other opportunities to take five wicket hauls. Catches do win you matches and we want to improve this area," he said.

The bowler backed the slip fielders who have been under the pump for some time now.

"The slip cordon has held some great catches in the past so they will miss one or two. We do not go to bowl thinking they will not hold catches. We trust the slip cordon to hold their catches," he added.

He added that India weren't surprised that South Africa opted to bat on a green-top wicket.

"We had a feeling that they would opt to bat first. It didn't really surprise us. We wanted to bowl first after winning the toss so it was fine with us. They were good conditions to bowl first.

"The ball was seaming a lot for the first 10-15 overs. We were able to use those conditions to get first three wickets in five overs," Bhuvneshwar said.

AB de Villiers played a counter-attacking knock and the bowler conceded that even after initial blows, the former Proteas skipper had taken away the session from them.

"When it comes to AB de Villiers, he is the best in the world and you have to be at your best to bowl to him. He was counter-attacking us and took the game from us. He didn't take it completely but he took the session away from us. It would have been good if we had got him out early," he added.

South Africa were reduced to 142 for 5 at one stage but recovered to reach 286 runs.

In order to get the lower-order out, the Indian bowlers attacked them with short-pitched bowling, a tactic that didn't necessarily work.

"It was a strategy to get them out. In the first two sessions, we didn't bowl short at all. In the third session, we wanted to get them out quickly and it was part of our planning.

"As a bowler, you want to go and bowl in helpful conditions in South Africa, England and Australia. But it is also important to bowl in the right areas, and they differ from bowler to bowler depending on conditions and the opposition," he said.

While India is struggling at 28 for 3, Bhuvneshwar feels that the game is still pretty evenly poised.

"I think the game is still evenly balanced on first day. I wouldn’t say that any one team is ahead. The only on our mind about what we want to do tomorrow is to bat well and bat for as long as possible," Bhuvneshwar signed off.