In the previous series against Bangladesh, the all-rounder picked three wickets giving away 55 runs. 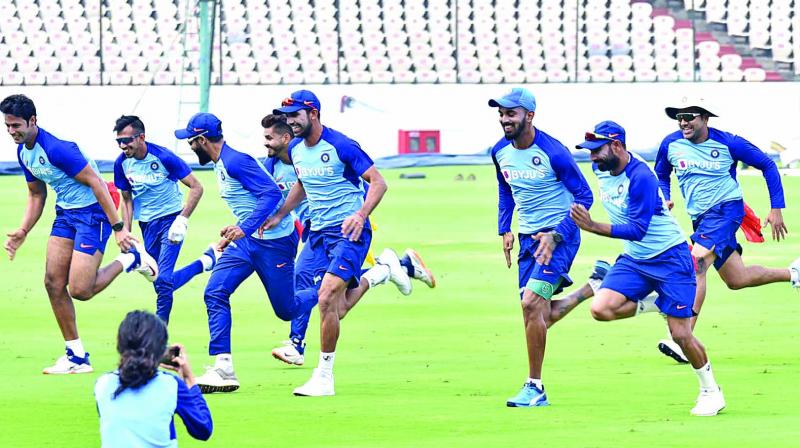 Members of Team India train in Hyderabad ahead of the first T20I against West Indies. (Photo: S Surender Reddy)

Hyderabad: For someone who gave up playing cricket from the crucial ages of 13 to 17, to being a part of the Indian men’s side at 26, Shivam Dube’s ascent to the top has been rapid. Ever since he went from 110 to 75kg — within a year — the Mumbai-born allrounder has stood out with his consistent performances in the domestic circuit, India ‘A’ and the recently concluded Vijay Hazare Trophy.

After collecting the Man of the Series award at the end of the four-day game series for India ‘A’ in the West Indies, the match-winning knocks against South Africa ‘A’ at home and the quick-fire 67-ball 118 against Karnataka in Vijay Hazare, Shivam started knocking on the senior team’s door.

But the Mumbaikar has plans of his own. “I don’t think I am looking to replace anyone. I don’t see this — being a part of the Indian team — as an opportunity to replace Hardik Pandya. I have got a job at hand and that is to do well for my country. I think I am capable enough to make a mark of my own,” a confident Shivam said.

On being asked if there is a new regime he is following to maintain the international standards of fitness, he said, “I am not doing anything different from what I used to do while playing in the domestic circuit or for India ‘A’. Being an allrounder, I have to maintain higher standards of fitness because I have to perform at my best in both batting as well as bowling.”

In the previous series against Bangladesh, the all-rounder picked three wickets giving away 55 runs. But the six-footer is confident of putting up a good show in the T20 series against Windies, starting on Friday. “I know the opposition (West Indies) have some powerful hitters in their batting order but we have done our homework and know how to handle them. At the moment, this Indian team is the best team in the world and we will win this series,” he concluded.