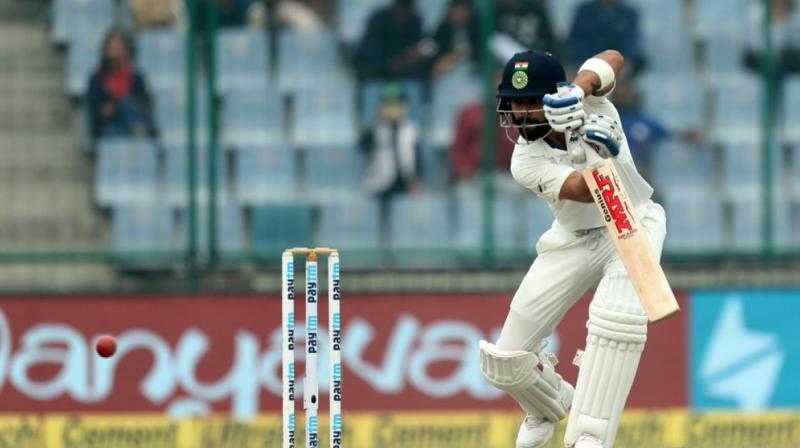 New Delhi: India finished Day 4 of the final Test against Sri Lanka on a good note after setting up a target of 410 at the Feroz Shah Kotla in New Delhi. A total of 3 wickets were lost on the day, and with a day to go, the pressure is on Dinesh Chandimal's men to chase a total of 379 to seal the final match.

Mohammed Shami struck first by dismissing Samarawickrama before Ravindra Jadeja put the visitors on the backfoot with 2 quick wickets in the form on Karunaratne and nightwatchman Lakmal.

Can Sri Lanka sustain the pressure or will Virat Kohli's men bag another bilateral series? Join us tomorrow for the action!

BOWLED! Nightwatchman Lakmal aims to defend one from Jadeja but the ball hits the toe of the bat and disturbs the wickets. 3 down Sri Lanka, immense pressure!

WICKET! Jadeja bowls to Karunaratne at a tight angle and the batsman has no choice but to go at it. Nicks it straight to Saha and he's gone.

Openers Dimuth Karunaratne and Sadeera Samarawickrama are going at three runs per over, and will look to avoid an early blow.

India declared their innings at 246-5 on Day four of the third Test match against Sri Lanka, setting up a target of 410 for the visitors.While Cheteshwar Pujara missed out on a fifty (49), Virat Kohli and Rohit Sharma scored fifties. Shikhar Dhawan, too, contributed by scoring 67 runs.

For the Lankans, all the bowlers who bowled took one wicket each.

Sri Lanka will have the rest of the day, and the entire Day five of the Test to chase the big total.

Rohit Sharma and Virat Kohli are batting with ease at the moment as they keep the scoreboard ticking.

Inspite of  losing Pujara and Dhawan after lunch India have managed to extend the lead. Kohli and Rohit have been able to keep the scoreboard ticking. Both the batsman will look to make some quick runs before declaring and setting up target for Sri Lanka to chase.

WICKET! Yet another wicket for Sri Lanka, left arm wrist spinner Sandakan dismisses Shikhar Dhawan for 67 runs. Dhawan coming down the track for a big swipe, was deceived by the flight. He misses the ball and Dickwella removes the bail to send him to dressing room.

Shikhar Dhawan brings up his 50 on his birthday and also reaches 2000 test runs with a six off left arm spinner Lakshan Sandakan.

WICKET! Dhananjaya De Silva with the breakthrough, no half-century for Pujara. De-Silva's delivery skids and takes edge of Pujara’s bat to go straight into the hands of Mathews at slip as he went nice and low to take the catch.

Pujara survives after LBW appeal by Sri Lankan bowler Dilruwan Perera. The bowler drifts the delivery across from round the wicket, Pujara is late to bring his bat down as the ball brushes the kneeroll.  Sri Lanka went for review but the impact was around off and the ball was sliding on to miss off-stump. Sri Lanka lose their review.

Pujara and Dhawan have started cautiously after lunch as they slowly try to build huge lead.

After bowling out Sri Lanka, Team India started their second innings by losing opener Murali Vijay and Ajinkya Rahane pretty cheaply. Vijay was the first man to be  dismissed when he edged Suranga Lakmal delivery  to wicket-keeper Niroshan Dickwella.

Ajinkya Rahane once again flopped with the bat as he was dismissed for 10 runs by Dilruwan Perera. India are currently leading by 214 runs and with Shikhan Dhawan and Cheteshwar Pujara  at the wicket, the host will look to up their ante.

Sri Lanka are fighting their way into the test match as their bowlers picked up early wickets. Opener Murali Vijay and Ajinkya Rahane are already back to the dressing room and with Virat Kohli  still to bat, the host are eyeing to take set up huge target to give bowlers a chance to bowl out Sri Lanka for the second time.

WICKET! Ajinkya Rahane's struggle with the bat continues as his innings come to an end. Dilruwan Perera with the breakthrough  for Sri Lanka. Rahane danced down the track to a delivery which was pitched out side off stump but mistimes his short as Sandakan holds the catch at long-on.

Close shave for Rahane, Dilruwan Perera bowled quicker off-break as Rahane  went on back foot to whip it away. The batsman failed to make contact as the ball crashed his pads. The on field umpire gives it not-out, but Sri Lankan ask for review which turns out to be unsuccessful.

After losing Murali Vijay early, Shikhar Dhawan and Ajinkya Rahane have steadied the ship for the host . Rahane who has been out of the form in the series gets a chance to get some runs after being promoted up the order.

Huge blow for Sri Lanka, Suranga Lakmal is taken off field after vomitting on field. The pacer had provided the early breakthrough for the visitors and now finds himself off the field as hazy condition makes life difficult for bowler.

Suranga Lakmal strikes early for Sri Lanka, Murali Vijay departs for 9. The ball was short of length as Vijay goes for a drive only to edge the ball to wicket- keeper Dickwella.

Sri Lanka's 1st innings finally comes to an end with Chandimal’s dismissal. The Sri Lankan captain was the last man to be dismissed for 164 runs.  The skipper was well supported by Angelo Mathews (111) and some handy contributions from Dilruwan Perera (42) and Sadeera Samarawickrama (33) helped the team to put up  a respectable total.

Dinesh Chandimal raises his bat after reaching 150 runs. The Sri Lanka skipper  is standing tall and denying Indian bowlers to get early wicket.

New Delhi: Sri Lanka batting finally came good in the third and final test at Feroz Shah Kotla in New Delhi. The third day of the final test saw Sri Lankan stage comeback, led by their two most experienced and talented batsmen in form of Angelo Mathews and skipper Dinesh Chandimal, as the duo put on 181 runs for the fourth wicket.

Chandimal remained unbeaten on 147 runs will look to add more runs to the team total in company of Lakshan Sandakan in the first session of the fourth day.

For Team India, Ravichandran Ashwin led the way with three wickets to help the team stage a strong comeback in the final session of Day 3. Sri Lanka lost five wickets for just 39 runs in the final session to finish day three on 356 for nine, trailing India by 180 runs and just one wicket left.

Alongside Ashwin, pacers Mohammed Shami, Ishant Sharma and left arm spinner Ravindra Jadeja all chipped in with 2 wickets apiece to put the visitors on the backfoot.