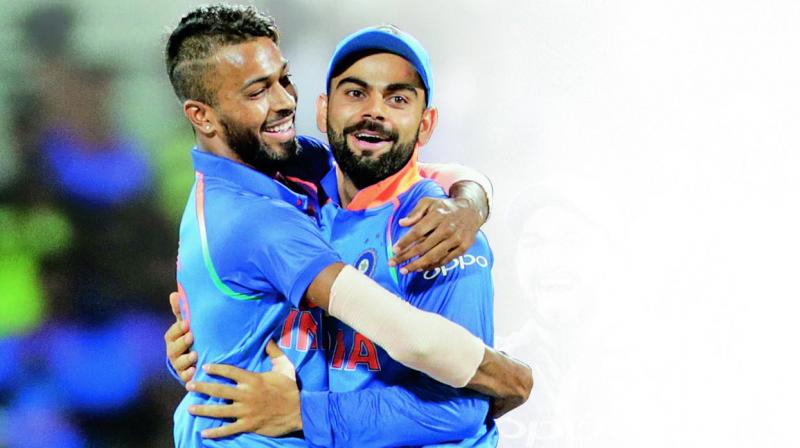 New Delhi: Virat Kohli led his men to yet another bilateral series win as they swept Australia 4-1 in the five-match ODI series. Before Australia won the fourth ODI in Bengaluru, Kohli also equalled M.S. Dhoni’s record as captain for leading the team to a nine-match unbeaten streak.

The results saw the Men in Blue achieve the top spot in the ICC ODI rankings. The Kohli-led side are also topping the charts in the Test rankings. Former India captain Sourav Ganguly said Kohli has got qualities of being one of India’s great captains.

“There’s no doubt about it. I think next 15 months will be important for him when India go to South Africa, England, Australia and the World Cup. I think he is in the right direction. He is preparing his team, he’s picking players and giving opportunities. They will beat New Zealand and Sri Lanka, there’s no doubt about it. India will be challenged when they go to South Africa but I feel this side has got the ability to do well there as well,” Ganguly was quoted saying by India Today.

Although Kohli had a quiet series with the bat, one player who caught the eye was all-rounder Hardik Pandya, producing outstanding displays with both ball and bat. Ganguly heaped praise on the 23-year-old as well.

“Hardik Pandya has the qualities to help this India team but don’t compare him with Kapil Dev at the moment. Kapil was an absolute champion. We will talk about it 10-15 years down the line once Pandya keeps playing that long. Let’s enjoy his cricket, he is a good cricketer, he is a positive cricketer. He’s a fighter and he has got heart when he plays cricket. That’s what you look in a young cricketer. I wish him all the best, hopefully, he continues to do good work for  Kohli,” Ganguly added.

India will now take on Australia in a three-match T20 series starting on Saturday. Among the surprise picks in the 15-member squad, was the return of veteran pacer Ashish Nehra. Nehra last played a T20 match vs England in January

“It’s a good news for Indian cricket that they have picked the ability and not age. He is an exceptional T20 bowler. We saw him in last T20 World Cup. He is a left-armer and he creates a different angle. I think he will come out with flying colours in this series as well,” Ganguly said.