The Indian team has already taken a 2-0 unassailable lead in the ongoing three-match T20I series against West Indies. 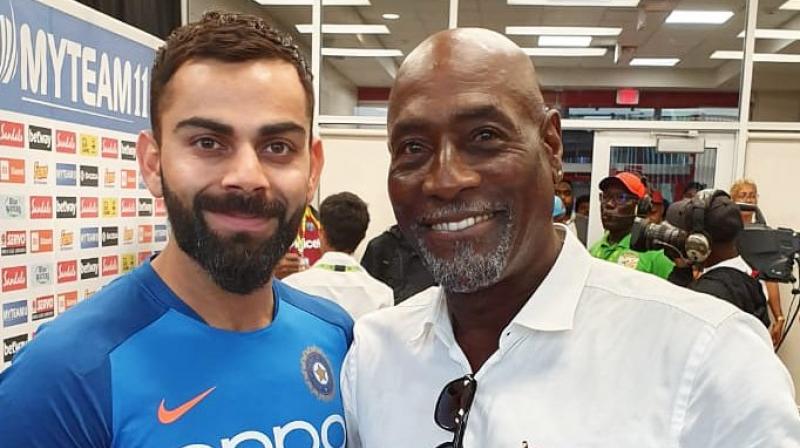 The 67-year-old Richards is still viewed as one of the best players to have ever played the sport of cricket. (Photo: Virat Kohli/Twitter)

The 67-year-old Richards is still viewed as one of the best players to have ever played the sport of cricket. He was the vital cog in Windies' invincible lineup during the 1980s.

Kohli is considered as a modern-day great as he is only behind Sachin Tendulkar in the most ODI centuries list. Kohli currently has 41 centuries and is only nine more centuries away from dethroning Tendulkar at the top spot.

The right-handed Kohli also has an impeccable record in Test as he has 6613 runs in the Test format at an average of 53.76.

Kohli has been surrounded by controversy of late as there were various media reports suggesting the right between him and vice-captain Rohit Sharma.

However, Kohli dismissed these reports at the pre-departure conference ahead of the West Indies series saying, "If I do not like a person or if I am insecure of a person, you will see that on my face or in my behaviour towards that person and that is how simple it is. I have always praised Rohit whenever I have had an opportunity because I believe he is that good. We have had no issues."

The Indian team has already taken a 2-0 unassailable lead in the ongoing three-match T20I series against West Indies.

Kohli has scored 47 runs in the series so far and the next team will next face West Indies in the final T20I on Tuesday, August 6 at Guyana.