The Committee reviewed team's performances in the last three years, including the World Cup. 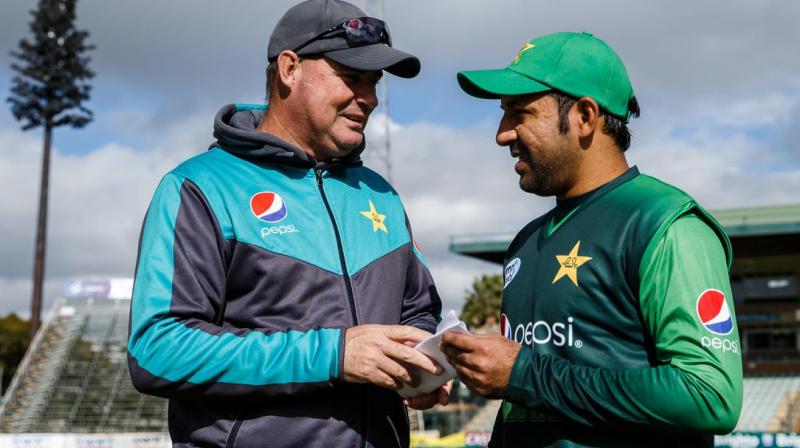 According to a source, Mickey Arthur suggested to the members that Shahdab Khan should replace Sarfaraz Ahmed as captain in the limited-over formats while Babar Azam should be given the reins of the Test side. (Photo:AFP)

Karachi: Pakistan head coach Mickey Arthur has recommended to the PCB's Cricket Committee that Sarfaraz Ahmed be sacked from captaincy as he himself sought two more years to deliver "remarkable results".

The Committee reviewed team's performances in the last three years, including the World Cup, where Pakistan could not qualify for the semifinals.

According to a source, Arthur suggested to the members that Shahdab Khan should replace Sarfaraz as captain in the limited-over formats while Babar Azam should be given the reins of the Test side.

"Arthur did have some negative things to say about Sarfaraz's captaincy skills to the members," the source said.

"I need two more years with the Pakistan team and then I can deliver remarkable results," Arthur is believed to have told the Committee, headed by PCB Managing Director Wasim Khan.

Khan will have one more session with the members on Wednesday before forwarding recommendations on the appointment of the new team management to the board Chairman Ehsan Mani.

Under him, Pakistan's biggest gain was winning the ICC Champions Trophy two years back. The team became number one in ICC's T20 rankings but performance in Test cricket dipped drastically while it remained inconsistent in One-day format.

The contracts of Arthur and other support staff member will expire on August 15.

Sources said Arthur, who made a presentation to the Committee on the team performances and selection decisions, is said to have left the members unimpressed with his arguments and explanations.

"The members were not satisfied with his argument that after the 2017 Champions Trophy the fielding standards of the Pakistan team went down after the forced exit of fielding coach, Australian Steve Rixon.

"Arthur made a big deal out of Rixon's sudden departure in August 2018 as he had issues with the PCB management over delayed payments," according to reliable sources.

The source added that after Arthur's presentation, the committee members discussed other options and one of the members suggested trying Sri Lanka's Mahela Jayawardena but was informed that since he was working with the Mumbai Indians in the IPL, the PCB would find it difficult to lure him with a better pay package.