Steven Smith was the star for the Aussies as he scored centuries in both innings of the Test match. 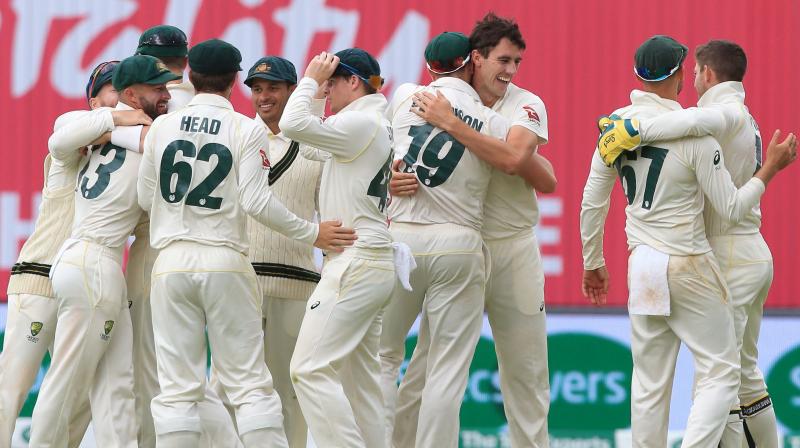 Lyon scalped six wickets in the second innings and as a result, he became the fourth Australian to cross 350 wickets in Test cricket. (Photo: AFP)

Edgbaston: Australia defeated England by 251 runs in the first Test match of the Ashes on Monday at Edgbaston.

Resuming day 5 at 13/0, England got off to bad start as they lost their centurion from the first innings, Rory Burns (11) pretty early. Pat Cummins bowled a short ball, the left-handed Burns looked to fend it off but he managed to lob a simple catch to Nathan Lyon.

Skipper Joe Root came out to bat next, and he, along with Jason Roy, managed to steady the ship as the duo put up a stand of 41 runs, but their resistance was cut short by Nathan Lyon as he castled the stumps of Roy (28).

Root (28) and Joe Denly (11) also got dismissed in quick succession by Lyon and England was staring down the barrel at 85/4 at lunch.

Immediately after the lunch break, Cummins got the crucial wicket of Jos Buttler (1) as he clean bowled him to reduce England to 85/5.

Chris Woakes and Moeen Ali stitched together a brief partnership of 39 runs, but their stand was broken by Lyon as he sent Ali (4) back to the pavilion. Stuart Broad (0) was dismissed on his first ball and England was reduced to 136/9.

Cummins got the final wicket of Woakes (37) to hand Australia a 251-run win.

Lyon scalped six wickets in the second innings and as a result, he became the fourth Australian to cross 350 wickets in Test cricket.

In the first innings, Australia scored 284 runs whereas England scored 374 runs, gaining a lead of 90 runs. But in the second innings, Aussies managed to post 497-7 to give England a target of 398 runs.

England and Australia will now take on each other in the second Test match, beginning August 14, at Lord's Cricket Ground.