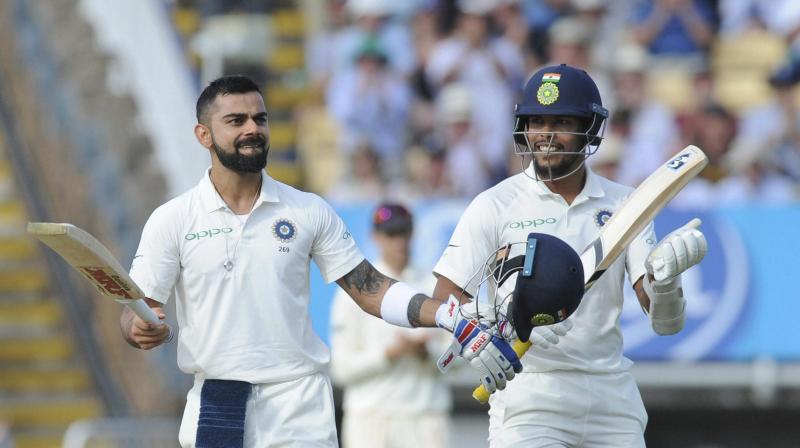 Kohli is now on top of the rankings for the first time in an impressive 67-Test career that has yielded 5,754 runs at an average of 54.28, including 22 hundreds. (Photo: AP)

Birmingham: Virat Kohli broke new ground by topping the International Cricket Council Test batting rankings for the first time in his career when the latest edition was published Sunday.

The India captain, already at the head of the equivalent one-day international batting chart, found himself at the summit of these standings after scoring 149 -- his maiden Test century in England -- and 51 during the series opener at Edgbaston.

Unfortunately for Kohli, his impressive match haul of exactly 200 runs could not prevent an India defeat by 31 runs on Saturday's fourth day in Birmingham, with England now 1-0 up in a five-match series.

Former Australia captain Smith is currently serving a 12-month international ban for his role in a ball-tampering scandal during a Test against South Africa at Cape Town in March,

Kohli is now on top of the rankings for the first time in an impressive 67-Test career that has yielded 5,754 runs at an average of 54.28, including 22 hundreds.

He now leads Smith by five points, but will have to maintain the form in the remaining four Tests to end the series as the world's highest-ranked batsman.

Kohli is the seventh Indian, and first since Sachin Tendulkar in June 2011, to hold the number-one Test batting position.

Apart from Kohli and Tendulkar, Rahul Dravid, Gautam Gambhir, Sunil Gavaskar, Virender Sehwag and Dilip Vengsarkar are the other India batsmen to have been in the top spot during their Test careers.

However, at 934 points, Kohli has become India's highest-ranked batsman, 14th overall, on the all-time tally of points.

Kohli had entered the Edgbaston Test on 903 points, 13 points behind former opening batsman Gavaskar, and is now ahead of the ICC Cricket Hall of Famer by 18 points.

Meanwhile James Anderson, England's all-time leading Test wicket-taker, remained on top of an unchanged top 10 in the Test bowling rankings following his impressive display at Edgbaston which included a brilliant duel with Kohli.

The rankings will next be updated following the second Test between England and India at Lord's, which begins on August 9.