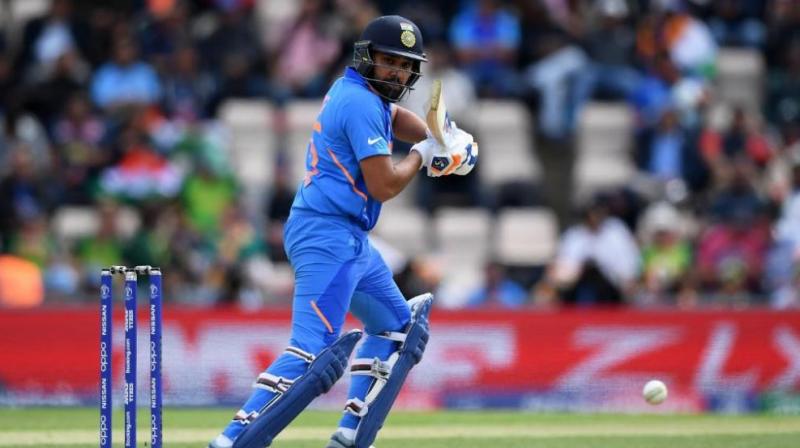 The Proteas are on the back-foot as their two prime pacers, Dale Steyn and Lungi Ngidi are already injured, and Dale Steyn has been ruled out of the tournament due to his shoulder injury. (Photo: Cricketworldcup/instagram)

Mumbai: Before India plays their first official World Cup match against South Africa, let’s have a look at how the two teams have fared.

India is considered as one of the favourites to win the mega-event and has dominated the limited overs format in recent years.

After smashing a ton against Bangladesh, KL Rahul has secured the number four spot of the Indian batting line-up. In the first warm-up game, India’s batting order collapsed against the fury of Jimmy Neesham and Trent Boult.

However, Kohli and co were successful to retaliate against Bangladesh by securing a convincing win. The bowling attack of Team India will be led by the pace trio of Jasprit Bumrah, Bhuvaneshwar Kumar and Mohammad Shami. India will also look to bank on the all-round capabilities of Hardik Pandya.

On the other hand, Proteas are already in trouble after losing their first two games against England and Bangladesh respectively.

South Africa missed the services of Hashim Amla and Dale Steyn in their previous match. Faf du Plessis will be hoping to lead the team to break their duck in the points table. The overcast conditions and rain might aid fast bowlers.

South Africa's bowling unit, led by Kagiso Rabada will be tested against a strong batting line-up. An over-reliance on the short ball and messy fielding was a major reason behind South Africa's defeat in their previous match against Bangladesh.

It is going to be an uphill task for the Proteas to bounce back on the stage and live up to their World Cup expectations.

India, with Rohit Sharma, dropped early in an innings of 122 not out -- the highest individual score of the tournament to date, took their time over the chase. India achieved the target with 15 balls to spare.

India win by six wickets! The Men in Blue start their World Cup 2019 campaign with a win over Proteas. South Africa's poor run in the tournament continues.

Hardik Pandya makes his way to the crease after Dhoni's departure.

46.1: WICKET! MS Dhoni tries to clear the fence but fails. The ball goes high up in the air and Chris Morris judges it right. MS Dhoni departs after building a good partnership with Rohit Sharma.

40.4: Rohit Sharma scores his 23rd ODI hundred. He overtakes Ganguly in the list of most ODI hundreds for India.

22.5: 50 for Rohit Sharma. A crucial knock to build the Indian innings.

15.3: WICKET! Indian skipper departs after scoring 18. De Kock takes a superb catch to dismiss Kohli. Phehlukwayo gets his first wicket and it is a big one.

5.1: WICKET! Rabada strikes in his third over. Dhawan nicks the ball to De Kock as India lose their first wicket on 13 runs. Rabada is pumped!

Rohit Sharma and Shikhar Dhawan walk to the crease. India have to chase 228 to win the match.

49.6: WICKET! Tahir gifts an easy catch to Kedar Jadhav to give Bhuveshwar kumar his second wicket.

49.2: WICKET! Bhuvneshwar kumar gets his first wicket as Morris trying to go bor a biggie gift a catch to skipper Kohli.

39.3: WICKET! Chahal gets his fourth. Phehlukwayo was trying to take a risk but he misses the ball and MS Dhoni does the job behind the stumps.

35.3: WICKET! Chahal breaks developing partnership between Miller and Phelukwayo and claims his third wicket as Miller gifts him an easy catch.

5.5: WICKET! Bumrah strikes once again as he removed in form De Kock who while trying to play an off drive, gave an easy catch to Rohit Sharma.

3.2: WICKET! Bumrah strikes in his second over. Amla nicks the ball to Rohit Sharma. South Africa lose an early wicket.

When is the match?
The match is scheduled to start at 3 pm IST on Wednesday. (June 5)

Where is the match?
The match will take place Rose Bowl Cricket Ground, Hampshire. .

The Proteas are on the back-foot as their two prime pacers, Dale Steyn and Lungi Ngidi are already injured, and Dale Steyn has been ruled out of the tournament due to his shoulder injury. The Proteas are totally clueless and have no idea about the current issue.

The Proteas have failed miserably at the tournament, and we have seen that during the World Cup. In the first match the South African bowling unit did well to restrict a formidable England side which looked on-course to post a massive first innings total beyond 300.

However, the batsmen, despite getting good starts threw their wickets by playing cheap shots that were unnecessary. Eventually, that led South Africa to receive a heavy thrashing at the hands of tournament favourites England.

While, in the second match against Bangladesh it was observed that the South Africa team relied too much on the pacers as the likes of Rabada and Ngidi were ineffective and conceded extra runs.

Those extra runs proved to be the main decider of the match as Bangladesh won the match by 21 runs.

South Africa was already down and out after their veteran pacer, Dale Steyn was ruled out for two matches. South Africa was further shaken when Hashim Amla was hit by a bouncer of England pacer Jofra Archer.

South Africa is too much dependent on Dale Steyn and Amla, and that’s their main problem.

To win a game, a single person can’t win the match on his own, efforts from other team members has to come. Notably, the Proteas batsman must step up to take the team beyond the line. Lastly,

As far as India’s concerned, India’s number four batting looks all sorted after KL Rahul slammed his maiden century against Bangladesh during the World Cup warm up match.

In addition, Mahendra Singh Dhoni also looked in his prime as both KL and Dhoni scored centuries to guide India towards a massive total of 359.

However, India’s openers, Shikhar Dhawan and Rohit Sharma, did get small starts, but, they failed to convert it to a big score. For India, there are plenty of advantages.

Dale Steyn has been ruled out of the whole tournament due to shoulder, so that means India doesn’t have to face the quick pace of the Steyn gun.

India’s lower order is also in form after Ravindra Jadeja scored a vital 54 in India’s loss against New Zealand during the warm ups.

Nonetheless, India does have one problem, that is, India is playing their first match now, while other teams have already played their second or third match already.

So, that means, India have to give their best in every match to be in the title race. And, giving 100 per cent all through-out the tournament isn’t always possible.

Finally let’s have a look at the key players for today’s match:

Quinton de Kock has good record against India. De Kock, so far been in good touch and he is expected to get South Africa to a flying start.

Van der Dussen has scored 444 runs in 11 ODIs for the Proteas at an average of 74. He has scored 50 versus England and 41 against Bangladesh.

Virat Kohli is currently the best batsman of this generation. He has a huge responsibility on his shoulders, as a batsman and captain, will anchor India forward in the marquee event.

Hardik Pandya performed brilliantly with both bat and ball. It will be interesting to see whether he can produce a similar performance in the World Cup also.

Markram made his sensational ODI debut against Bangladesh as he scored 66 runs along with his scalp of two wickets.

However, since he assumed the charge as ODI captain for the series versus India, Markram has not lived up to his standards and Coach Gibson has observed that.

However in the World Cup Aiden Markram did get a good start with a score of 45, but, failed to turn it into a big score.

Hard-hitting left-hander David Miller is a powerful batsman capable of changing the course of a match and an outstanding fielder. He was man of the series in a recent T20 series win against Pakistan.

In 2015 World Cup, Miller notched up 324 runs with a strike rate of 139, becoming South Africa's second top run sorer. David will be playing as a pinch-hitter for the Proteas.