Mitchell Starc missed a chance for a hat-trick as he took three wickets in four balls. 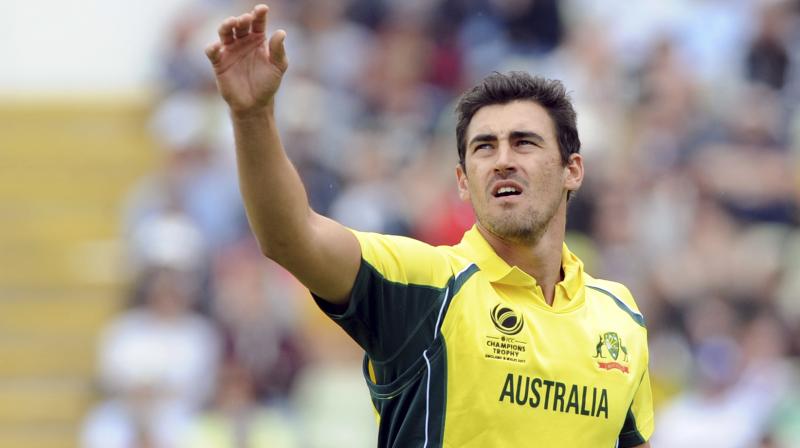 Starc destroyed Bangladesh late in the innings with a sensational death bowling display. He grabbed three wickets from the 43rd over, including that of Iqbal. He then scalped the last Bangladesh batsman to end the innings early.

The Australian fast bowler missed a chance for a hat-trick as he took three wickets in four balls.

Electing to bat on an Oval pitch that offered pace but little swing, Iqbal played a lone hand in the face of some fine bowling by the Australians as he steered his side to a respectable total.

His 69-run stand for the fourth wicket with Shakib Al Hasan (29) was the only substantial partnership for the Bangladesh side with only three batsmen reaching to double digit figures.

Iqbal hit six fours and three sixes in his fine 144-ball innings as he gave scant respect of the Australian bowlers who otherwise gave a good account of themselves.

Bangladesh began at a slow pace with the Australians tying them down by bowling a tight line and length. On top of that, Bangladesh lost wickets at regular intervals with Iqbal being the one making a resistance to the Australian bowlers.

Soumya Sarkar (3) was the first to go in the sixth over at team score of 22 with Josh Hazlewood edging him to Matthew Wade as the opening batsman played without any foot movement.

One down Imrul Kayes (6) was beaten by Pat Cummins' pace as the batsman offered a simple catch to Aaron Finch at cover point as Bangladesh were reduced to 37 for 2 in the 11th over.

Wicketkeeper batsman Mushfiqur Rahim (9) did not last long as he fell LBW to a Moises Henriques delivery in the 17th over and Bangladesh were in trouble at 53 for 3.

Iqbal was, however, unruffled even though wickets fell regularly at the other end. He picked Henriques for a special treatment in the 23rd over, hitting the bowler for two fours and a six to collect 16 runs from it.

In the next over, Iqbal reached to his 37th fifty in his 171st ODI with a single off Travis Head.

Shakib gave got good support to Iqbal for a while as the duo added 69 runs for the fourth wicket before he fell LBW to a delivery off in the 30th over. Adam Zampa then rocked the Bangladesh innings with two quick scalps.

Zampa, the world's top ODI bowler, first had Sabbir Rahman (8) caught by Smith in the 35th over before scalping the wicket of Mahmudullah in the 37th over.

Bangladesh reached 171/6 at the end of 40th over and it was left to Iqbal to accelerate the innings in the last 10 overs. But he fell in 43rd over bowled by Starc who grabbed three wickets in a dramatic death bowling show.