Bhuvneshwar Kumar struck in the first over removing Parthiv Patel as his mistimed shot fell to local boy Manish Pandey. 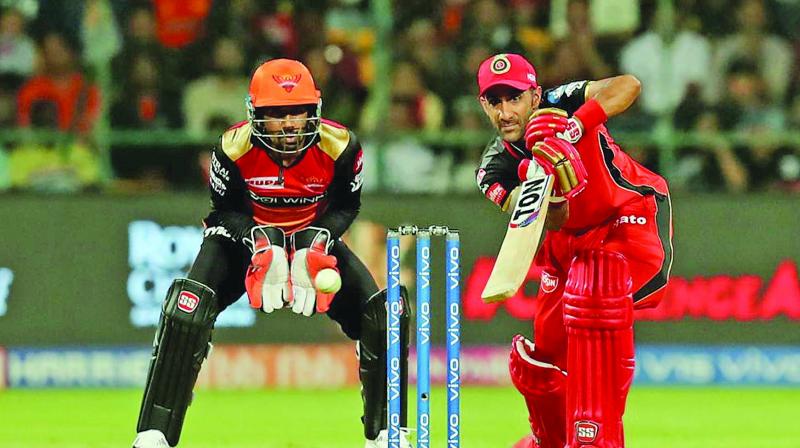 Bangaluru: Shimron Hetmyer announced his arrival on the IPL stage in the final league game as Royal Challengers Bangalore defeated Sunrisers Hyderabad by four wickets to leave the Sunrisers on the brink of elimination. Hetmyer (75  off 47 balls) and Gurkeerat Singh Mann (65 off 48 balls) put on a 144-run partnership that steered Bangalore home. Late wickets only added to the drama but the game was decided by that partnership.

The chase began on the wrong note for the Royal Challengers as they were reduced to 20/3, with Parthiv Patel, Virat Kohli and AB de Villiers dismissed. Bhuvneshwar Kumar struck in the first over removing Parthiv Patel as his mistimed shot fell to local boy Manish Pandey. Kohli struck a four and a six off Khaleel Ahmed’s first two balls but departed soon after edging a wide delivery of Ahmed to Saha.

Bhuvneshwar sent back De Villiers, as he edged a fuller length delivery to Martin Guptill at first slip. Hetmyer steadied the innnings after the initial onslaught along with Gurkeerat as he found boundaries with ease. The Windies batsman took a liking to Rashid Khan as he smoked him for two sixes in the 11th over to bring up his maiden IPL fifty. Pathan dropped a straight forward chance from Hetmyer on 60 only to add to the bowling woes. Rashid was off colour as he conceded 44 runs in his four overs.

Earlier, it was captain Kane Williamson who led from the front with the bat as Sunrisers posted 175/7. His knock of 70 (5x4, 4x6) kept them in the game at the end of the first innings. Williamson calculated innings was the lone bright spark in an otherwise abject innings that saw wickets fall at regular intervals.

Wriddhiman Saha and Martin Guptill gave a brisk start to the Sunrisers as they put on 46 runs for the first wicket. Saha hit Yuzvendra Chahal for a hat-trick of boundaries in the third over before falling to Navdeep Saini, trying to clear the infield. 52 runs came off the power play as Guptill was the aggressor, as he picked 19 runs off the second over.

Washington Sundar struck a double blow in the eighth over when he had Guptill 30 ( 2x4, 2x6) caught at mid-wicket by Kohli and dismissed Manish Pandey immediately as he holed out to Shimron Hetmyer in the deep.

Sundar and Chahal tied down the scoring rate in the middle overs as Sunrisers mustered only 19 runs between overs 5 and 9.