A usual day at Shivaji Park was lit-up with Brett Lee’s appearance in disguise. 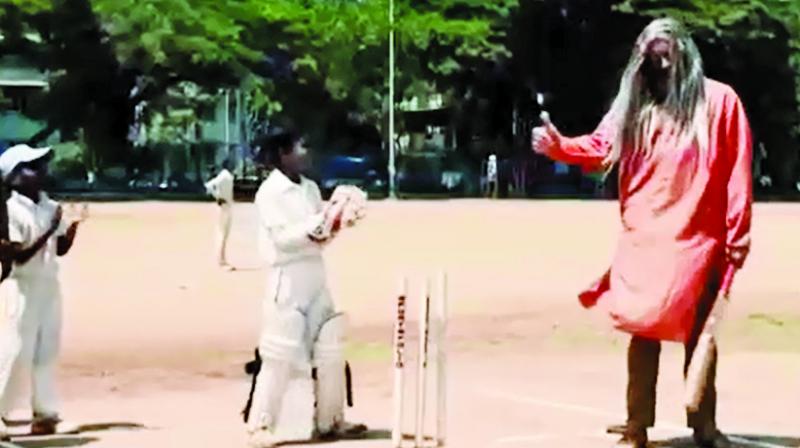 A still from the video

Brett Lee was always a popular cricketer in Indian. Even though he was involved in an occasional sledging against Indian cricketers, the Australian fast bowler has the reputation of being one of the gentlemen of the sport.  ‘Binga’ as he is nicknamed, has done many acts off the pitch to show his affection for the country. Be it his song with Asha Bhosle or his movie ‘UnIndian’, Lee often tries to portray his affection for India. Last week, the Aussie surprised a bunch of young cricketers who were practicing at Shivaji Park by disguising himself as an old man.

Usually, the landscape of Shivaji Park in Dadar is packed with kids decked in full white kits around uneven cricket pitches. A plethora of cricketers from Mumbai have started off their careers from those uneven pitches. Last week, there was an unusual visitor on the enormous ground. A rather scruffy appearance in a long orange kurta and, untidy white hair and beard suggested that the man was a sage who had lost his way.

He then went on to play cricket with a bunch of kids. At first, he indulged the kids in conversation to get a few tips on batting but missed a couple of deliveries giving the kids something to laugh at. Moments later, he moved on to bowling, but could not manage even a single legal delivery.

Seconds past, he started off with a long run-up and the famous bowling action, which once terrorised the best batsmen in the world. What followed was a flashback — off go the stumps! The young batsmen saw their stumps being uprooted with quit an ease.

Later the old man came back to bat, this time whacking the red cherry all over the park. By this time, children had realised they were going to witness something extra-ordinary. With the cameras around, they had an idea that there will be something out of the blue in the store for them. Soon, Lee revealed his real identity to the children, who were left confused, surprised and excited.

An idea of the Head of Broadcasting of Star Sports, the plan is to engage the young fanatics of the sport by allowing them to meet international legends like Lee himself who are in India for Indian Premier League. “The plan is to indulge the youngsters who practice at grounds like Shivaji Park and Azad Maidan with the sport,” says a source from Star Sports.

“Even Dean Jones paid a visit to Azad Maidan one fine day and played with the kids. We just don’t want to broadcast the games but also engage the people with the sport. We feel that fun and laughter is a good way to do it. Brett Lee is someone who has been connected to India some way or the other and this was one more act for him,” he says.

While this may sound like something new for India, the West has already seen many such appearances from eminent footballers and basketball players. Cristiano Ronaldo appeared on the streets once covered in a body suit and make-up as if he were an old man.

Working as an analyst and Pundit for Star Sports for IPL, Brett Lee indulged in this activity for the broadcasting company. We might see another cricketer in one of the grounds of the city. Better keep an eye open!