The Royal Challengers are coming off a seven-wicket loss against the Rajasthan Royals where they were outdone by the spin and guile of Shreyas Gopal. 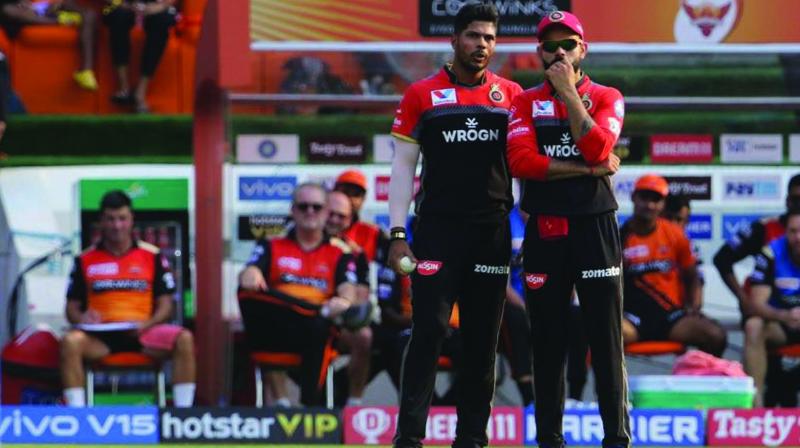 BENGALURU: Four games into the season and it already looks dire for the Royal Challengers Bangalore as they remain winless, languishing at the bottom of the table. It is now or never for the Virat Kohli-led side to stop the rut and start winning as a fifth defeat would land a severe blow to their chances of qualifying for the playoffs.

The Royal Challengers are coming off a seven-wicket loss against the Rajasthan Royals where they were outdone by the spin and guile of Shreyas Gopal. It is under these circumstances that the Royal Challengers take on Kolkata Knight Riders at the M. Chinnaswamy stadium on Friday.

The wicket in the previous game at the Chinnaswamy saw scores of 180 and going by the recent track record, it should be good for batting. Knight Riders leg-spinner, Piyush Chawla said that it was difficult to predict a par score on the pitch. “I have not yet seen the wicket. But as you know Bangalore is a high scoring ground, so you can’t predict what is the par score here but as a bowling unit we would like to restrict them as low as possible,” he said.

Big guns yet to fire
Coming into the season, a lot was expected from the RCB batting line-up that boasts of Virat Kohli, AB de Villiers and Shimron Hetymer in the ranks. With the lone exception of  De Villiers’ knock against Mumbai Indians against whom they ended up narrowly losing, there hasn’t been any sizeable contribution from the rest. Having tried different opening partnerships, it appears the team has settled on the pair of Parthiv Patel and Kohli.

Parthiv Patel, on the eve of the game made no bones about the fact that the team was under the pump following a string of successive defeats.  “We can’t sit here and say we are 0-4 and we are happy about it! But the only thing, to be honest, we are quite positive about the team we have. We feel that if we play to our potential, we will get that required momentum,” the wicketkeeper-batsman said.

The pace trio of Umesh Yadav, Navdeep Saini and Mohammad Siraj will have to bowl in tandem at the start and death and complement spinner Yuzvendra Chahal who has been the bright spark in the bowling department.

Rusell power
The Knight Riders started off with a bang winning the first two games before losing in dramatic fashion via a Super Over against Delhi Capitals. Once again all eyes will be on Andre Rusell who has been in blazing form in this season. Much will also be expected from Chris Lynn, Robin Uthappa and Nitish Rana who form the core of the batting with Dinesh Karthik and Rusell to follow.