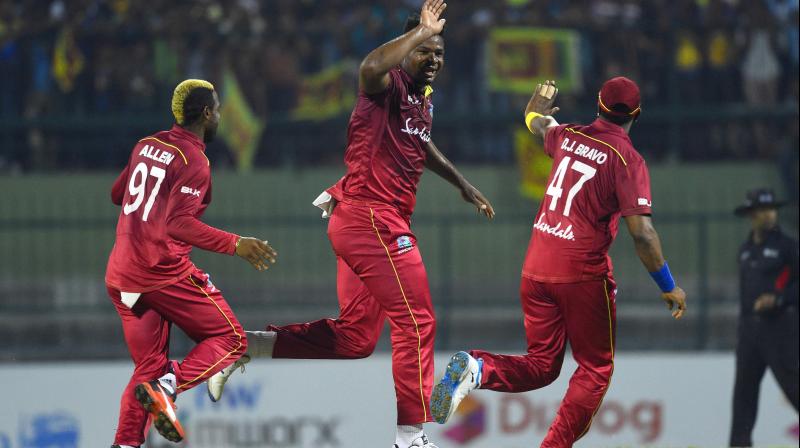 Oshane Thomas (centre) celebrates a wicket with his teammates during the Pallekele T20 match against Sri Lanka on Wednesday. AFP Photo

Lendl Simmons hit an unbeaten 67 as West Indies, who chose to bat, made 196-4 to set up the 25-run win in the opening match of the two-game series.

Still hurting after losing the one-day series 3-0, West Indies smashed nine sixes in their innings as they dominated the Sri Lankan bowlers. Simmons and Brandon King, who hit 33, put on 74 for the first wicket to lay the foundation for the challenging total

Andre Russell then made 35 off 14 balls and captain Keiron Pollard, in his 500th T20 match, hit 34 off 15 to give a spectacular finish to the innings.

Thomas's bouncer-laden fast bowling devastated the Sri Lankan batting and they were all out for 171 in the final over. Kusal Perera top-scored with 66.

Opener Avishka Fernando, Shehan Jayasuriya, Kusal Mendis and Angelo Mathews were all out caught while flashing at Thomas' fiery short-pitched bowling. Sri Lanka fought back from 56-5 but were never seriously in the hunt.

The second and final match of the series is in Pallekele on Friday.