ICC slammed over lack of common sense over lunch break 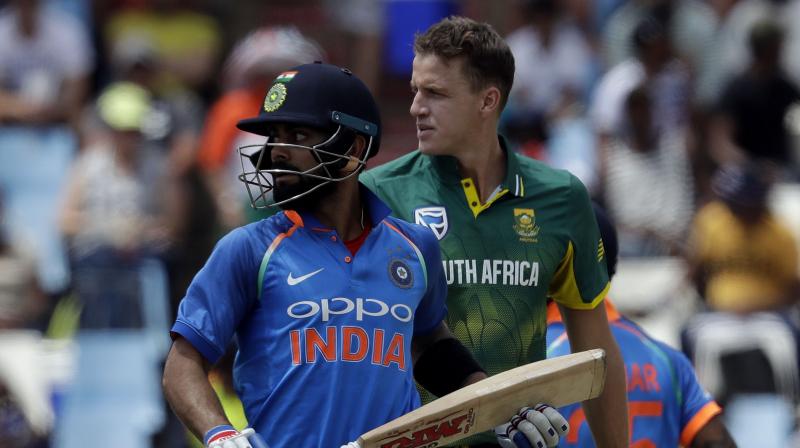 Opting to field, India bowled out South Africa for a meagre 118 and then were comfortably placed at 117 for one in 18 overs when the umpires called for lunch as per ICC rules. (Photo: AP)

Centurion: The International Cricket Council (ICC) came in for sharp criticism for its bizarre rules on playing conditions after the play was stopped for lunch with India needing just two runs to win the second ODI against South Africa here on Sunday.

Both the on-field umpires -- veteran Aleem Dar and Adrian Holdstock and match referee Andy Pycroft were criticised by TV commentators and cricket pundits, who termed their decision to call for lunch as per ICC's 'rigid' playing condition rules with India needing just two runs to win as 'farce'.

Opting to field, India bowled out South Africa for a meagre 118 and then were comfortably placed at 117 for one in 18 overs when the umpires called for lunch as per ICC rules.

The decision did not go down well with all and sundry because the umpires had already extended pre-lunch play by three overs. At the scheduled time of break, India were 93 for one after 15 overs.

But to the astonishment of players, spectators and commentators, the umpires stuck to the letter of the regulations, ordering a 40-minute lunch break before India could complete a comprehensive win to take a 2-0 lead in the six-match series.

"They (ICC) want to make the game attractive but this was a ridiculous decision," Holding said while commentating.

In fact neither of the team looked happy with the decision with India skipper Virat Kohli, who was batting along side Shikhar Dhawan at that time, even taking up the matter with the on-field umpires but to no avail.

Lunch has been taken at Centurion, with India 117/1, needing two more runs to beat South Africa and go 2-0 up in the ODI series.

The Twitter users lashed out at the cricket's governing body.

India need to re-assess their strategy on how to go about getting those mighty 2 runs. With only 9 wickets left, it's looking like an improbable task right now. India will get plenty of time to plan carefully during the LUNCH break tho. #SAvsIND

Even this gate is more useful than the lunch break in today's match !!#INDvSA #SAvIND #SAvsIND 2nd ODI pic.twitter.com/bmYLc4Ks6h

Isn’t there anything that could be done, for 2 runs, so much has to be done over again, this is where the Referee should interfere #SAvsIND #wasteoftime

I wish everyone follows the traffic rules in India to the dot just liked umpire followed the rule by calling off the play for lunch when India need just two runs to win...😉