He said Kohli's passion to put together a strong fast-bowling unit has made it easier to build on the foundation that Kapil laid. 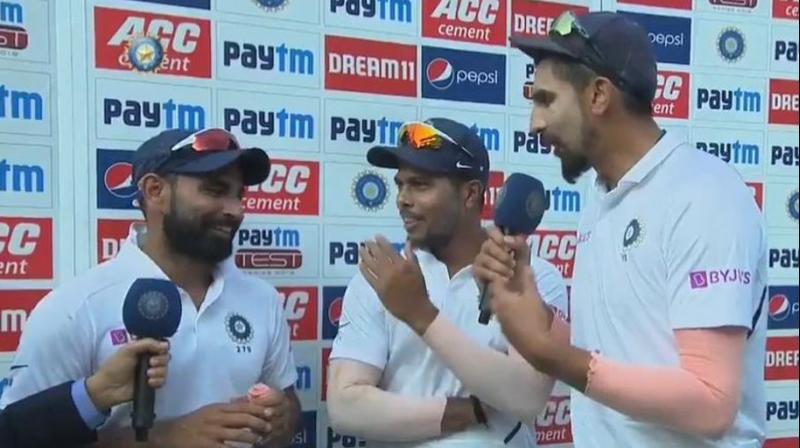 Former West Indies speedster Ian Bishop says the foundation of India's 'another level' fast bowling unit was laid by the likes of legendary Kapil Dev and built on by current captain Virat Kohli, who believes in the attack. (Photo:BCCI)

New Delhi: Former West Indies speedster Ian Bishop says the foundation of India's "another level" fast bowling unit was laid by the likes of legendary Kapil Dev and built on by current captain Virat Kohli, who believes in the attack.

He said Kohli's passion to put together a strong fast-bowling unit has made it easier to build on the foundation that Kapil laid.

"Let's remember that this group of bowlers did not emanate right now. The foundation was laid - if you go back to Kapil (Dev) and down the line, Javagal Srinath, Zaheer Khan, Munaf Patel, Sreesanth," Bishop said in an interview with 'ESPNCricinfo'.

"Now it's been built on with a captain who likes fast bowlers, who believes in them. But also the fact that you've found a generational talent in Jasprit Bumrah.

"Generational because he plays all formats of the game very well. And (Mohd.) Shami has taken his game to another level. Ishant (Sharma) has also gone up another level," he added.

The 52-year-old Bishop, who took 161 wickets in 43 Tests between 1989 and 1998, said he couldn't have predicted that India's fast bowlers would come to the Caribbean and do to the West Indians what they did to others so many decades ago.

"So credit to Bharath Arun, the bowling coach, and the administrators and captains. I couldn't see this much (improvement), but I thought there was a great deal of promise in having guys who could bowl close to, or over, 90mph," he said.

He, however, refused to compare the Indian unit to the fearsome West Indians of the past.

"Well, they (Indians) have been performing that well that the comparisons are going to come. I would want to stay away from it, because I don't know how you measure it.

"When people talk about (Michael) Holding and (Joel) Garner and (Malcolm) Marshall and (Colin) Croft and (Andy) Roberts - who bowled together for so many years - how do you compare with that?" he asked.

Bishop was also reluctant to pick the best among the current crop of fast bowlers in the world.

"There are so many. Jofra Archer. I almost feel when he's on song that it's the perfect streamlined technique. Naseem Shah. Jasprit Bumrah. Mohammed Shami - oh god, I love Shami! That whole core group of what India bring, where I don't want to pick anyone and say, 'This one more than the other'.

"If I had to pick the best technique right now, Jofra Archer when he's firing. But, I am salivating about world cricket (because of fast bowling talent). That is exciting."

"I'm eagerly waiting to see if Shivam Mavi and Kamlesh Nagarkoti can be fit and continue their progress. Nagarkoti, in particular."

Describing India as a "cauldron" and dominant force in world cricket, Bishop said a T20 World Cup triumph does not mean that the West Indies can beat Virat Kohli's men during the limited-overs series beginning on Friday though there's always a hope to do so.

"Well, you always have a chance of winning. (But) How many people come to India and beat India? It's a cauldron. My expectation and hope is for them (West Indies) to win - but if they don't, I'm not going to be put off.

"This is what I want people in the Caribbean particularly to understand: India are a dominant force in the world game. West Indies can't go from winning one World Cup game to beating a team that got to the semi-finals of that World Cup with assurance.

"The fans will want to see victory, but what I'm saying is, maybe this Indian tour is a bridge too soon. If it doesn't happen, all is not lost."

He said West Indies' limited overs tour of India will serve as a good preparation for next year's T20 World Cup.

"Victory will be important, but if it doesn't happen against this dynamic Indian team, it is not, 'Break the house down and build it over'. It is about fine-tuning their game for the T20 World Cup next year and then in 2021."