Earlier this year, Morgan had led England to their first-ever 50-over World Cup triumph. 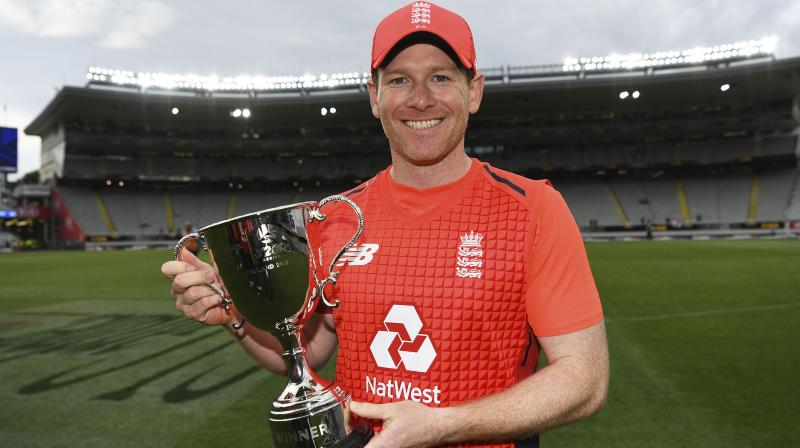 England limited-overs skipper Eoin Morgan will be leading the London Spirit men's team in the inaugural edition of 'The hundred' slated to be played next year, head coach Shane Warne confirmed on Wednesday. (Photo:AP)

London: England limited-overs skipper Eoin Morgan will be leading the London Spirit men's team in the inaugural edition of 'The hundred' slated to be played next year, head coach Shane Warne confirmed on Wednesday.

"As a player and a captain I am always looking for ways to improve and it's clear from speaking to Shane - who has an amazing cricket brain, about everything from tactics in this new competition to how to get the best from our squad - that this is an exciting opportunity to take cricket forward," Morgan said in an official statement.

Earlier this year, Morgan had led England to their first-ever 50-over World Cup triumph. Under his leadership, the side had also managed to reach the finals of the T20 World Cup 2016.

While Heather Knight will be leading the London Spirit women's team in the tournament's inaugural edition.

The franchise has also appointed Trevor Griffin as the women's head coach.

"I am really looking forward to captaining the London Spirit women's team in The Hundred next year. With the new format, there's going to be the chance to have a real tactical input as a captain and I'm excited to work that out and also bring together a new team in a new competition," Knight said.

Knight had led England to their fourth Women's World Cup in 2017.

Scheduled for 2020, the tournament will see eight new city-based teams competing over a five-week period.

The new white-ball cricket is a 100-ball per innings format. In the matches, a change of end will take place after ten balls and bowlers can deliver either five or ten consecutive balls.

Each bowler can deliver a maximum of 20 balls per game and each bowling side gets a strategic timeout of up to two and a half minutes.

Moreover, The Hundred will have a 25-ball powerplay start for each team and two fielders will be allowed outside of the initial 30-yard circle during the powerplay.

These playing conditions have been recommended by ECB's Cricket Committee.