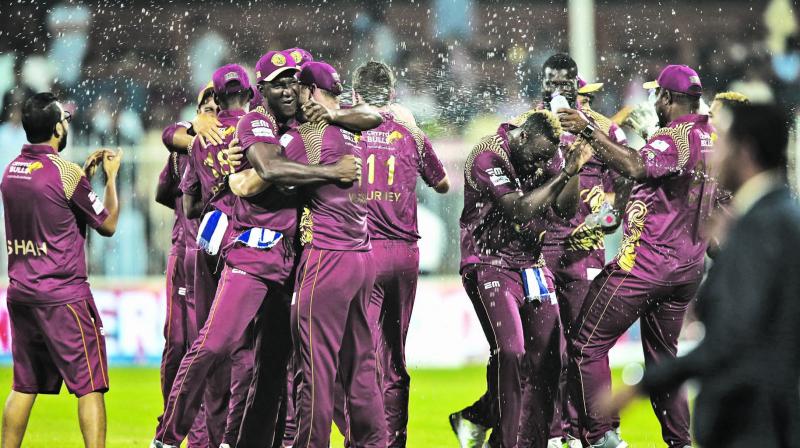 Northern Warriors players celebrate their win over Pakhtoon in the T10 League final on Sunday.

After winning the toss, Pakhtoon captain Shahid Afridi asked Northern Warriors to bat hoping to restrict the newcomers to a low score. However, Warriors captain Daren Sammy had other plans. They put up a fighting score of 140/3 in their allotted overs, led by Rovman Powell’s 61 off 25 balls that embedded with eight fours and four sixes and Andre Russell’s 38 off 12 balls, powered by three fours and four sixes. League’s top scorer Nicholas Pooran added 18 runs in 10 balls to his 206 runs of the tournament to take it to 324 runs total.

Liam Dawson was the most expensive bowler, giving away 27 runs in an over that helped the Northern Warriors to put up the second highest total of the T10 League so far.

While chasing the highest T10 League total, Pakhtoon team had a modest start. They were chasing the target well till the fifth over with Andre Russel and Shafiqullah Shafaq contributing mostly. However, it was Hardus Viljoen, who took two wickets in quick succession to restrict the chase as wickets continue to fall and the Pakhtoon team could only manage 118/7.

Earlier in the third-place play off, West Indies batsman Sherfane Rutherford scored 46 off 21 balls studded with six sixes and one four put up a team total of 127/4 chasing Maratha Arabians’ 121/6. Muhammad Usman chipped in with 28 for the winners.