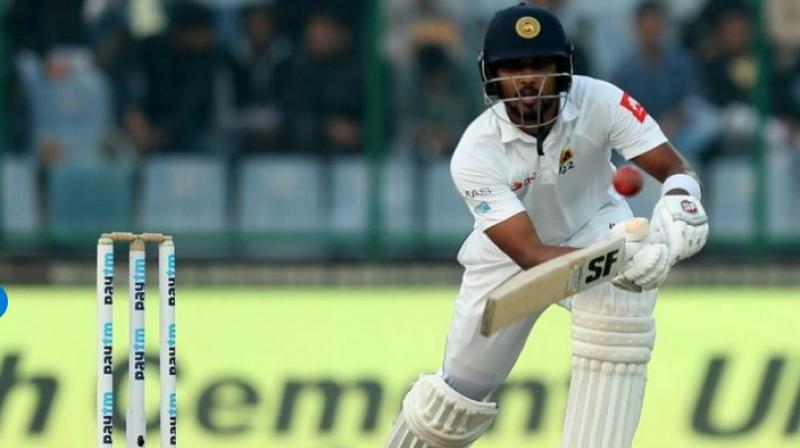 With wickets falling at one end Sri Lanka skipper Dinesh Chandimal have been trying to hold the innings from the other end (Photo: BCCI)

New Delhi: Team India staged a strong comeback to restrict Sri Lanka to 356/9 at the end of third days play in the final test match between both the teams currently being played at Feroz Shah Kotla stadium in New Delhi.

Senior batsman Angelo Mathews and skipper captain Dinesh Chandimal, put on 181 run stand for the third wicket as Mathews scored 111 runs before being dismissed by Ashwin. Chandimal who is still at the crease is currently unbeaten on 147 runs. The Sri Lankan skipper scored his 10th Test century, as air pollution created health issues for the Lankan skipper early in the 1st session.

For India, R Ashwin was the pick of the bowlers picking up 3-90 in 35 overs he bowled today. He was supported well other bowlers Ishant Sharma, Mohammed Shami and Ravindra Jadeja who picked up two wickets a piece. All in all, India made a strong comeback late in the day and with two days left India will look to bowl out Sri Lanka as early as possible .

Ravindra Jadeja picks up 9th wicket for India as Lahiru Gamage is adjudge LBW. The ball skidded and went straight to hit the batsman on the pad, Gamage goes for review, but the review confirmed that batsman is hit right in front.

Suranga Lakmal dismissed by Mohammed Shami caught by Wriddhiman Saha behind the stumps. Yet another breakthrough for India. Lakmal pokes at a ball  pitched outside off before holding its line and taking an edge.

WICKET! Sri Lanka have lost debutant Roshen Silva for a duck. After a perfect start, all of a sudden, the Islanders have started to collapse.

WICKET! Sadeera Samarawickrama has departed for 33. Sri Lanka have started to lose wickets again. Will Chandimal play a one-man show?

CENTURY! Dinesh Chandimal has played a captain's knock to complete a well-played hundred.

New Delhi: India fought back strongly to remove Angelo Mathews for 111 as R Ashwin got the crucial wicket, breaking a 186-run partnership.

Currently, Dinesh Chandimal and Sadeera Samarawickrama are the ones batting.

Earlier, Mathews had got to his eighth Test century, as Sri Lanka looked in a commanding position.

Chandimal, batting on 98, will hope to get to his 10th Test ton in the post-lunch session, as they look to reply positively to India’s mammoth total.

Sri Lanka have done well to recover themselves from an early blow. While the partnership has crossed well beyong 150, Team India will hope for a breakthrough.

CENTURY! It is hundred number eight for Angelo Mathews. When will India find a breakthrough?

New Delhi: It was a session that belonged to visitors Sri Lanka as Dinesh Chandimal and Angelo Mathews took them to 192-3 at lunch on Day three of the third Test against India on Monday.

During the morning session, Chandimal got to his 16th Test fifty, as the partnership between the duo crossed 100.

Meanwhile, Mathews is onto his nervous 90s now, and will look to clinch his eighth Test hundred in the post-lunch session.

India will hope to break this partnership as it would dent the visitors' hopes of continuing their good run.

Its fifty number 16 for captain Chandimal, as he takes his team towards 200.

Angelo Mathews and Dinesh Chandimal bring up their 100-run partnership, as the visitors march further.

Captain Dinesh Chandimal and Angelo Mathews have taken the visitors past 150, and will look to continue this positive momentum as their partnership nears 100.

Captain Dinesh Chandimal and Angelo Mathews have got off to a careful start, and will ensure that they do not lose another wicket.

New Delhi: Sri Lanka captain Dinesh Chandimal and his current batting partner Angelo Mathews will hope to take the visitors forward as they search for a comeback on Day three of the third Test against hosts India here on Monday.

The visitors struggled on Sunday during their bowling due to smog and bad levels of pollution, and some of them even had to wear masks for protection. At 536-7, Virat Kohli had decided to declare, and let the visitors bat.

Lanka’s batting woes continued as they lost opener Dimuth Karunaratne in the very first ball of the innings. Soon after, they lost Dananjaya de Silva, who managed to score just one run.

However, a 61-run partnership between Dilruwan Perera and Angelo Mathews saw the Islanders back on track, after which the former departed for 42 runs.

Mathews and skipper Dinesh Chandimal are currently batting, and will hope to continue the momentum, as they continue their 56-run partnership.

For India, Mohammed Shami, Ishant Sharma and Ravindra Jadeja were among the wicket-takers, with Ashwin still searching for his first wicket. A total of 16 maiden overs have been bowled between the four bowlers.