Sports   Cricket  04 Nov 2019  Eoin Morgan says that their fielding was not what 'they aspire to'
Sports, Cricket

England's fielders seemed to be distracted by the glare of the sun a few times. 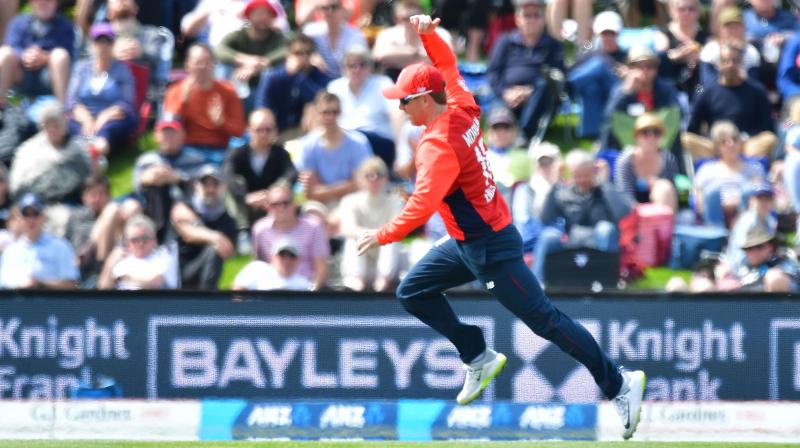 England skipper Eoin Morgan was disappointed with his side's fielding performance and said it was not that 'we aspire to'. (Photo: AFP)

Dubai: After losing the second T20I against New Zealand by 21 runs, England limited-overs skipper Eoin Morgan was disappointed with his side's fielding performance and said it was not that 'we aspire to'.

"When you drop that amount of catches it's not a great reflection on the performance and the levels of fielding that we aspire to. There were a couple of catches that went in the sun which made it look a lot worse but as regards our standard catches, we expect more," International Cricket Council (ICC) quoted Morgan as saying.

"That's not what we want, we want guys continuing to attack the ball, find themselves in hot spots if they're good enough and if they drop catches, they drop catches. That's the nature of it," he added.

James Vince and Dawid Malan missed catches. Wicketkeeper Sam Billings also failed to grab a sharp chance. England's fielders seemed to be distracted by the glare of the sun a few times.

"I think it's more of an attitude thing because there's such a short turnaround, the natural default of any player is to step back and not commit to a 50-50 chance or their mindset changes to go back in their shell," Morgan said.

New Zealand defeated England by 21 runs on Sunday in the second T20I of the five-match series at the Westpac Stadium in Wellington.

With the win, the Kiwis have levelled the five-match series at 1-1.

England, the current 50-over World Champions, has rested quite a few of its mainstays and has got the likes of Sam Curran, Saqib Mohammed, Pat Brown, Tom Banton, Matt Parkinson and Malan in the squad.

The English skipper was glad that the new players in the side were not having things all their own way, believing adversity is an important step in their journey towards regular international cricket.

"We have to make mistakes. If guys come in and smash it from the start and really find international cricket easy, I don't think that's a great opportunity given to guys. We want to see guys being pegged back and how they react from there. Chances will continue to come and opportunities will continue to come regardless of the result," Morgan said.