Ultimately, Aiden Markram found the ball and brought it back in play. 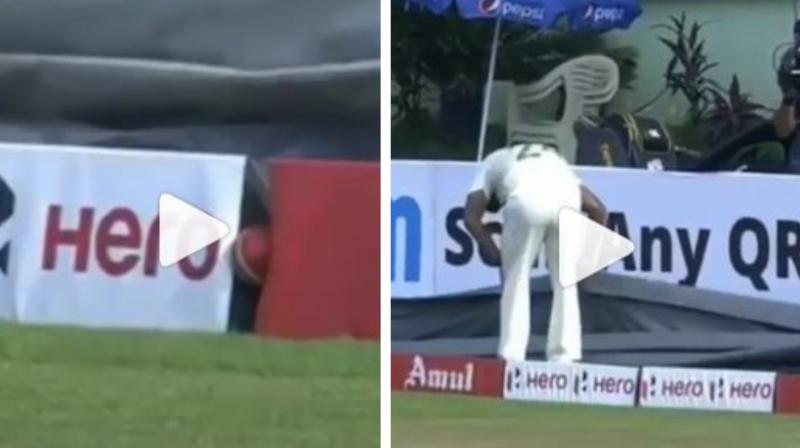 The ball eventually ended up being stuck between two advertisement boards. Following that, the Proteas fielders started searching for it – under the covers just in-front of the ball. (Photo: Screengrab/Instagram)

Mumbai: India dominated the first day of the first Test match against the South Africans after Rohit Sharma led the charge, with Mayank Agarwal playing the anchor’s role.

The duo put on a massive 317-runs opening partnership. After Rohit’s dismissal, Mayank paired with Captain Virat Kohli and Ajinkya Rahane to put on two 50-runs stand, which eventually led Mayank to his maiden double ton.

After Agarwal got out, all India had to do was – to take the total past 500 as soon as possible on Day 2 and make the South Africans in the final session of the day. After Ravindra Jadeja came in to bat, he played an anchor’s role with his 46-balls 40-runs knock, while the other batsmen continued to hit boundaries.

During Jadeja’s 46-balls knock, the left-hander didn’t hit a single boundary. However, Keshav Maharaj bowled a delivery, which trickled down the leg side for four byes.

The ball eventually ended up being stuck between two advertisement boards. Following that, the Proteas fielders started searching for it – under the covers just in-front of the ball.

After the South African players found it difficult to find the ball, the commentators were left stunned. However, ultimately, Aiden Markram found the ball and brought it back in play.