Playing his first Test in India, Agarwal showed remarkable concentration and endurance for his monumental 215 off 371 balls. 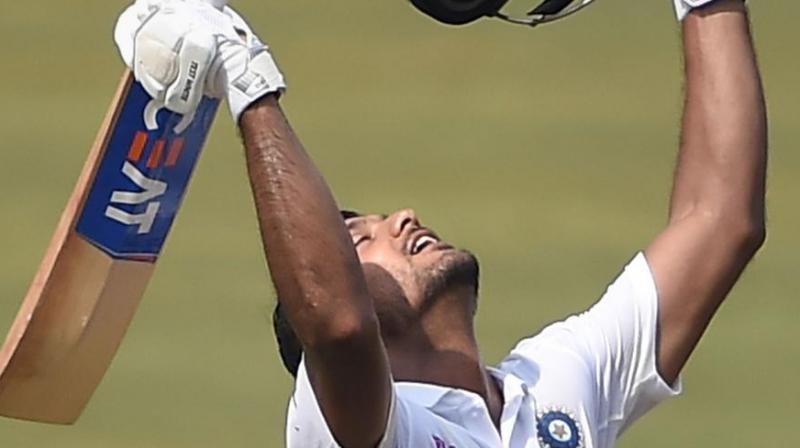 Playing his first Test in India, Agarwal showed remarkable concentration and endurance for his monumental 215 off 371 balls that allowed the hosts to declare their first innings at 502 for seven on Thursday.

“Long distance running has helped me. When I was training before the season (2017-18 domestic season), my coach and I made sure we bat five-six hours. We would make sure that we would have two and half hour session, take a little break and then bat again. So it is just preparing in that manner, preparing that for long hours has helped me combined with long distance running,” said Agarwal after day two.

His first hundred came off 204 balls and second off 154 balls. Asked what made him accelerate after reaching his 100, the 28-year-old said,”Just having crossed that milestone it put some nerves to ease and then having played on this wicket for some time, it gave me confidence.”

“We had good measure of their bowling. Once I got to a big score, we made sure that we put the pressure back on the bowlers, put away the loose balls,” said Agarwal, who also does Vipassana to improve his game.

But it is not just about scoring big, insists the Bangalore-based cricketer.

“You can’t think about what is going to happen if you are not going to get runs. It is very clear in the side that it is not only about big runs, it is about winning crucial situations. If you do that, nothing like it. As an opener you have to set the tone for your side.”

In his fledgling five-Test career, Agarwal has played with three different opening partners. This time it was Rohit Sharma who made a sublime 176 in his first innings as Test opener.

Does different partners impact his batting approach? “Not really because every batsman who is playing is a quality batsman.”

He resumed the day on 84. Asked what skipper Virat Kohli told him after he came back into the dressing room on Wednesday.

“The one thing he told me, actually he told me twice. He told me listen ‘you have 80 now so bat through’. Even after I got a hundred he said bat long. So it’s about the team and the way they encourage and the environment is created to go out there and perform.”

On batting alongside Rohit, Agarwal added, “For him to get such a big score first time opening the batting is tremendous. We all really enjoyed the way he batted. The way he took on the spinners, the way he paced his innings. It was great batting alongside him. It’s nice obviously getting a 300-run partnership.”