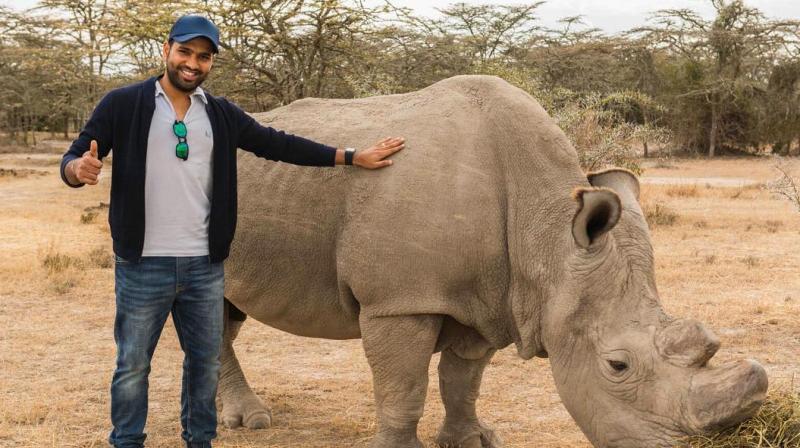 In a campaign launching on Animal Planet to commemorate World Rhino Day on September 22, Rohit pledges to do his bit to save the "vulnerable" species from extinction. (Photo: Instagram)

Mumbai: India vice-captain Rohit Sharma is launching Rohit4Rhinos campaign, in partnership with WWF India and Animal Planet, to help build awareness for the need to conserve the Greater One-Horned Rhinoceros or the Indian Rhino.

In a campaign launching on Animal Planet to commemorate World Rhino Day on September 22, Rohit pledges to do his bit to save the "vulnerable" species from extinction.

Talking about Rhino conservation campaign, Rohit said: "It is our duty as co-inhabitants of this planet to try and protect other species that walk this planet, alongside us.

"The future is in our hands and we should do whatever we can to ensure that our children are able to enjoy the rich bio-diversity this world has to offer. I hope that this campaign will inspire others to come forward and join Animal Planet, WWF India and I in this endeavour to save the Greater One-Horned Rhinoceros."

"Discovery has long been committed to telling the stories and protecting the creatures that make our planet extraordinary. We remain steadfast to leverage the brand strength of India's leading wildlife channel Animal Planet to galvanize people power for the cause of endangered species," said, Megha Tata, MD South Asia, Discovery.

"WWF India would like to thank Rohit Sharma for being the voice of conservation and for his continuous support in raising awareness about the greater one-horned rhinos. Decades-old stories of rhino conservation success in India need to be told and we believe that the campaign Rohit4Rhinos being implemented in partnership with WWF India and Animal Planet will also be able to bring attention to the challenges that conservationists face in protecting the species," said, Dr Dipankar Ghose, Director, Species and Landscapes, WWF India.