England had already confirmed their team, with fast bowler Craig Overton replacing Chris Woakes in the only change to the side. 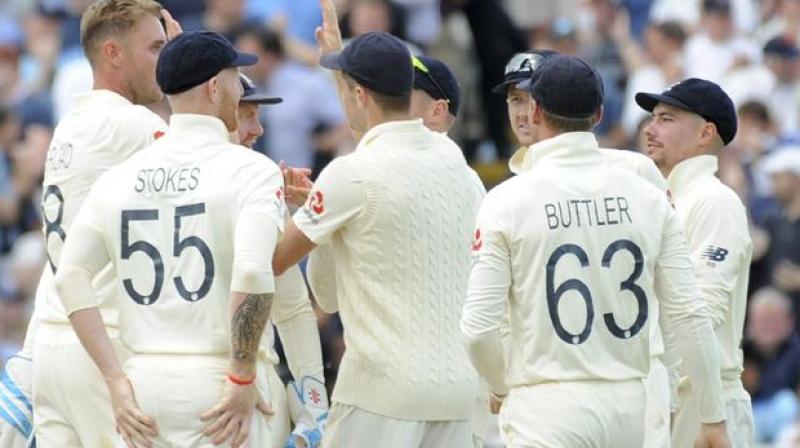 Holders Australia are bidding to win their first Ashes series in England since 2001. (Photo: AP)

Manchester: Australia captain Tim Paine won the toss and opted to bat against England in the fourth Ashes Test at Old Trafford on Wednesday.

England had already confirmed their team, with fast bowler Craig Overton replacing Chris Woakes in the only change to the side that achieved a remarkable one-wicket win in the third Test at Headingley to level the five-match series at 1-1.

But they altered their batting order after being dismissed for just 67 in their first innings at Headingley, with opener Jason Roy and number four Joe Denly changing places.

Australia welcomed back star batsman Steve Smith, who was ruled out of the Headingley match after being concussed by a 92 miles-per-hour (148 kph) Jofra Archer bouncer in the drawn second Test at Lord's.

Smith, on top of the latest ICC Test batting rankings published Tuesday, has scored 378 runs -- including two hundreds -- at an average of 126 in three innings in the series and was back on the field in last week's tour match against Derbyshire.

He replaced the struggling Usman Khawaja, who has averaged just 20.33 in six innings in the series batting at number three.

The tourists, who have rotated their fast bowling line-up throughout the series, brought in left-arm quick Mitchell Starc for his first Test of this Ashes on what is expected to be the quickest pitch of the campaign, with Peter Siddle omitted.

In a late change, umpire Kumar Dharmasena was promoted to stand in the middle alongside South Africa's Marais Erasmus instead of fellow Sri Lankan official Ruchira Palliyaguruge, who is now on TV umpire duty.

Both Erasmus and Dharmanena are on the ICC's elite panel of umpires, unlike Palliyaguruge.

The officiating during the Ashes has come under severe scrutiny amid a welter of reviewed decisions.

Holders Australia are bidding to win their first Ashes series in England since 2001. It is also 18 years since England last lost a Test at Old Trafford.