India ended day three on 110-5, still needing another 84 runs to win, with Kohli unbeaten on 43. Dinesh Karthik was with his captain on 18. 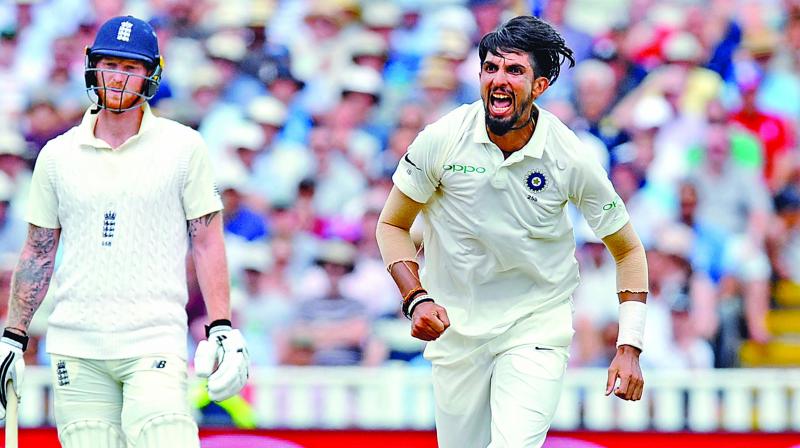 Birmingham: India's hopes of victory in the first test against England once again rest with captain Virat Kohli.

Kohli, a brilliant century-maker in the first innings, is underpinning the tourists' quest to chase down a target of 194 in what could be a tight finish to a riveting match at Edgbaston.

India ended day three on 110-5, still needing another 84 runs to win, with Kohli unbeaten on 43. Dinesh Karthik was with his captain on 18.

If India was to pull off a first victory in seven attempts at Edgbaston, it would almost single-handedly be down to Kohli. He ran out England captain Joe Root on the opening day, then rescued India's first innings with a gritty knock of 149 that ended a sorry run of test scores on English soil.

Kohli has scored exactly half of India's runs (384) in the match. This from a player whose top score from 10 innings in the five-test series in England in 2014 was 39.

England began the day on 9-1, lurched to 87-7, and then needed a first test half-century from 20-year-old swing bowler Sam Curran to get to 180 all out.

India was reduced to 78-5 - four of the wickets coming from catches by wicketkeeper Jonny Bairstow - but Kohli and Karthik battled to reach stumps unscathed, with their partnership up to 32.

The last hour, played in fading light and overcast, muggy conditions, was tense, with Kohli reining in his shot-making, knowing how important it was to be there on Saturday morning.

Curran's 65-ball knock of 63 was the opposite, a wonderful salvo that featured two sixes - one coming over extra cover off paceman Ishant Sharma to bring up his fifty.

The innings was all the more impressive because England was in such trouble when he came in, after Sharma had taken three wickets in five balls either side of lunch to plunge the hosts from 85-4 to 87-7.

Curran was given a standing ovation when he was last man out, caught behind by Karthik.

Sharma claimed 5-51 and offspinner Ravichandran Ashwin, who dismissed Alastair Cook with the last ball of day two and then removed Keaton Jennings (8) and Root (14) early on Friday, picked up 3-59.

India started its second innings nervously with Murali Vijay - dropped in the slips on 1 by Dawid Malan, who also had two spills in the first innings - trapped lbw by Stuart Broad for 6.

However, with Kohli still there at the close, India will be confident of sealing the deal on Saturday.