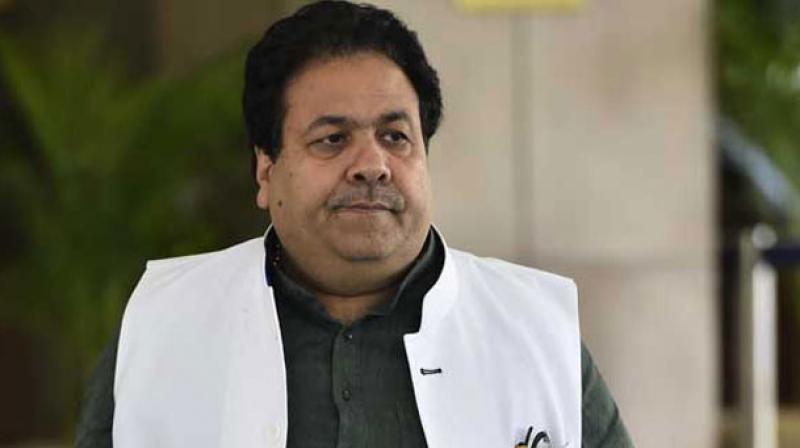 Rajiv Shukla believed Rayudu's talent could have been utilised in a much better way for the country. (Photo: PTI)

New Delhi: After Ambati Rayudu announced his retirement from all forms of cricket on Wednesday, former minister and IPL chairman Rajeev Shukla said the middle order batsman hung up his boots too soon and that he still had a lot of cricket left in him.

Former minister and Chairman of IPL Rajeev Shukla said: "I don't think this was the right time for him to hang his boots, a lot of cricket is still left in him. His talent should have been used in a better way for the country which didn't happen."

In a Twitter post Shukla said "Too early, too soon for a man who had a lot of cricket left in him. @RayuduAmbati, the crowded stands of stadiums will miss your lofty strokes. Wish you well for life ahead."

Too early, too soon for a man who had a lot of cricket left in him. @RayuduAmbati, the crowded stands of stadiums will miss your lofty strokes. Wish you well for life ahead. #Cricket #AmbatiRayuduRetires

In a letter to the BCCI on Wednesday, Rayudu said, "I have come to decision to step away from the sport and retire from all forms and levels of the game."

The move was made after the cricketer was snubbed by the Indian team management, which gave Vijay Shankar a chance in the 15-member World Cup Squad.

The cricketing fraternity sympathised with Rayudu, who was overlooked by the team management and he received support from former cricketers Virender Sehwag, Mohammad Kaif and VVS Laxman among others who posted messages for him on social media.

Gambhir in a tweet post cornered the selectors, saying they had an "unfulfilled career" and failed to give Rayudu a fair run.

"What surprises me most is that the entire @BCCI current selection panel had an unfulfilled career themselves!!!Even then they could not give a fair run to talent like @RayuduAmbati. What a shame!!! While it's important to win titles, guess it's more important to have a heart," Gambhir tweeted.

Rayudu was a regular member in the Indian squad for the past one year and averaged 47.05 in the ODI format. He had been team's number four batsman since the Asia Cup last year. He had scored one century and four half-centuries since then.

Rayudu even scored 113-ball 90 in New Zealand earlier this year paving the way for India's victory. But he fell off the wagon of late as he was not able to replicate his good performances in the ODI series against Australia. The batsman played 55 ODIs for India, scoring 1694 runs at an average of 47.06