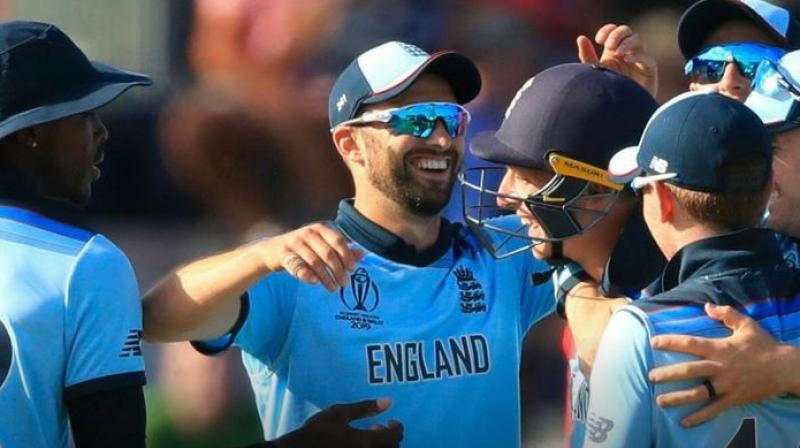 After defeating New Zealand by an emphatic margin of 119-runs, England reached the semis, becoming the third team after Australia and India to reach the semi-finals. (Photo:AP)

Mumbai: England became the third team after Australia and India to qualify for the semi-finals of the 2019 World Cup with a 119-run win over New Zealand on Wednesday, 3 July.

After defeating New Zealand by an emphatic margin of 119-runs, England reached the semis, becoming the third team after Australia and India to reach the semi-finals.

Both England and New Zealand have played their last group match on Wednesday. However, four additional matches are yet to be played before the semi-finals which are slated to start on July 9, 2019.

Meanwhile, Twitterati congratulated the England team for reaching the semi-finals after 27 years. Read the netizens reaction after England qualified for the semis.

So...the hosts are through. The formula of winning the toss and batting first is foolproof. But will it stand the test of the knockout pressure?? We shall find out.... for the time being. Favourites haven’t disappointed in the end. #CWC19 #EngvNZ

New Zealand have lost their last two games by a combined margin of 205 runs still they are miles ahead of Pakistan in NRR. That shows how terribly Pakistan played in the first game against West Indies. #CWC19

So England make it to their first semi-finals after 1992 WC. Well done !#EngvNZ

England beat New Zealand by 119 runs. England and NZ qualify for the semi-final. Pakistan is practically out from #CWC19. Good to see deserving teams in the top 4. 👏👍👊 #ENGvNZ #NZvENG

Wow
What a win for England. They are into the tournament now #CWC19

For Pakistan to qualify,

If they bat second, they are automatically eliminated.#ENGvNZ

England become the 3rd team to qualify for the semi-finals and will play in the 2nd semi-final at Edgbaston next Thursday #CWC19 #ENGvNZ pic.twitter.com/NaI8Wv43U2

However, England’s victory indicates that Pakistan’s hopes of reaching the semis are nearly over.