Despite losing by 119 runs to England, New Zealand have one foot in the last four. 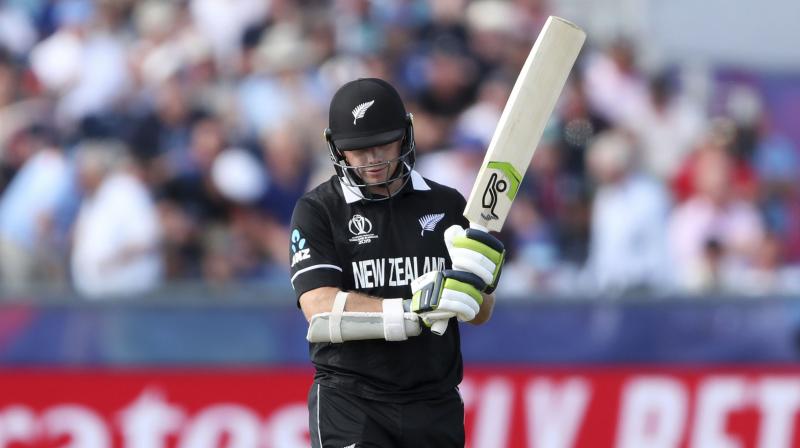 Left-hander Tom Latham, 27, made his first half-century of the tournament before he was dismissed by Liam Punkett on Wednesday. (Photo: AP)

Chester-le-Street: His father was part of the team that went till semifinals in the 1992 World Cup and New Zealand's wicket-keeper batsman Tom Latham says he is determined to go a step further in the ongoing edition.

Despite losing by 119 runs to England, New Zealand, who have never won the World Cup, have one foot in the last four with Pakistan needing a highly improbable margin of victory over Bangladesh to oust them.

Rod Latham, who played four Tests and 33 ODIS for New Zealand, was part of the Black Caps squad that lost to eventual winners Pakistan in the 1992 edition of the World Cup.

"I've spoken to him a lot over the years about that tournament  it was the same format as this one and hopefully we can go one better than they did," Tom said.

Left-hander Tom, 27, made his first half-century of the tournament before he was dismissed by Liam Punkett on Wednesday.

"It was nice to spend time in the middle and get familiar with the things that I do well but we weren't on the right side of the result."

The Black Caps vice-captain was batting in familiar surroundings at the Riverside, having played two seasons for Durham.

"It was nice to come back and see a lot of familiar faces. It was a great day here in the north-east."

New Zealand suffered their third straight defeat of the tournament, losing by 119 runs to England. Chasing 306, the Kane Williamson-led side collapsed under pressure managing just 186 but all-rounder Jimmy Neesham said he has already moved on from the defeat.

The all-rounder was the pick of the Kiwi bowlers, taking 2/42 and removing the dangerous Jason Roy. But despite defeat and the remote possibility of a Pakistan miracle at Lord's, the Black Caps seem to be in the semi-finals.

"It was poor, certainly below the level we expect of ourselves as a team. But if you look at our goal this tournament, it was to give ourselves a chance of making the semi-finals," Neesham said.

"Once you are in the top four it is only a case of having two good days and anything prior to that will be swept under the carpet. We prepare for every game and I will forget this game tomorrow," he added.

New Zealand have seemed far too reliant on captain Williamson with the openers disappointing in all the games.

Against England too Henry Nicholls and Martin Guptill were gone within the first six overs leaving the 2015 finalists reeling at 14 for 2.

"It would have required a good start and I think we had a fair bit of misfortune in our top four especially. We didn't have a whole lot go our way.

"We certainly had a chance when myself and Tom were together to put something together and give ourselves a chance of a tilt at the end.

"It wasn't to be but we are pretty happy to have ended up in the semi-finals," Neesham said.