Morgan's men secured a semi-final spot -- England's first at the World Cup since 1992 -- with their impressive 119-run thrashing of Kiwis. 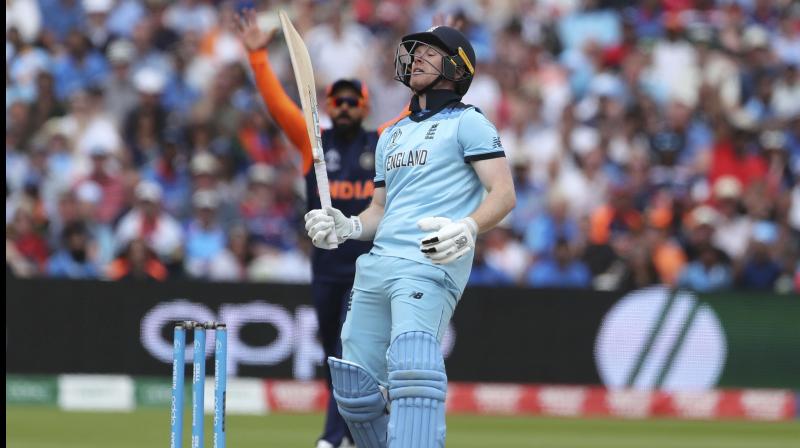 Victory meant they are guaranteed to finish third in the 10-team round robin and so take part in the second semi-final at Edgbaston on July 11. England beat India, their potential last four opponents, by 31 runs at the Birmingham ground on Sunday and they have won their last 10 matches in all formats at Edgbaston. (Photo:AP)

Chester-le-Street: England captain Eoin Morgan said it felt "pretty cool" to be in the World Cup semi-finals as the hosts look forward to playing their last-four clash at Edgbaston.

Morgan's men secured a semi-final spot -- England's first at the World Cup since 1992 -- with their impressive 119-run thrashing of New Zealand at Chester-le-Street on Wednesday.

Victory meant they are guaranteed to finish third in the 10-team round robin and so take part in the second semi-final at Edgbaston on July 11. England beat India, their potential last four opponents, by 31 runs at the Birmingham ground on Sunday and they have won their last 10 matches in all formats at Edgbaston.

"It's a place that we really like playing," said Morgan.

"If we had a choice of where we would play our group-stage games, Edgbaston, the Oval and Trent Bridge would probably be the three grounds where we would have played the nine games.

"It is comforting that we are going to one of those three grounds." England's total of 305-8 against New Zealand, made after Morgan won the toss, was built on a third successive century stand between openers Jonny Bairstow and Jason Roy.

Bairstow's 106 was also his second successive century after the Yorkshireman's 111 against India.

"We knew that these two games were must-win games if we were to give ourselves the best opportunity to get into the semi-finals because we knew the performances in the last couple of games hadn't been up to scratch," said Bairstow.

"So to play the way we have in the last two games and hopefully in the semis is pleasing." Bairstow and Roy's 10th century partnership ensured England made the most of good batting conditions on a pitch that deteriorated sharply as the game went on.

Morgan, asked if the openers made the rest of the team feel calm, replied: "It is not really calmness, it is more excitement.

"The guys are buzzing, laughing, smiling at how ridiculous some of the shots the two guys are playing, good balls being hit for four or six, how difficult they are to bowl at. You have got to laugh at it." England's big-match temperament was called into question after back-to-back group defeats by Sri Lanka and holders Australia.

"Whatever the way you play, it should be the extremity of that on the day because you don't get another chance and it's taken us time to get to grips with that," said Morgan.

"We do stick to our mantra the whole time and not actually be cagey, or desperate, or anything in those sort of regards. It doesn't work for us and it won't win us the World Cup."

England, who have never won the World Cup, now have more than a week off before the semi-final, but Morgan doesn't think that will be a problem.

"I can't wait to do nothing, or get distracted by other things that I enjoy doing," he said.

"I suppose we have rode the rollercoaster of playing well, playing terrible and playing good again, so particularly our bowlers, they need a rest, they need to get away.

"And our batsmen need to get away from the game and hopefully come back fresh." All of England's three defeats this World Cup have come batting second, suggesting the toss is becoming a key factor.

"Before the tournament started I thought that might be a trend, the toss, being a huge deciding factor in the game, but I thought it would have been the other way around," said Morgan.

"I thought the ball might have swung a bit more if conditions were cloudy and there was a bit of rain around and everybody would have bowled first and chased.

"It's been the complete opposite, so it shows how much I know!"