In a short time, Bumrah has not only grown as India’s bowling spearhead, but also evolved as a key member of the think tank. 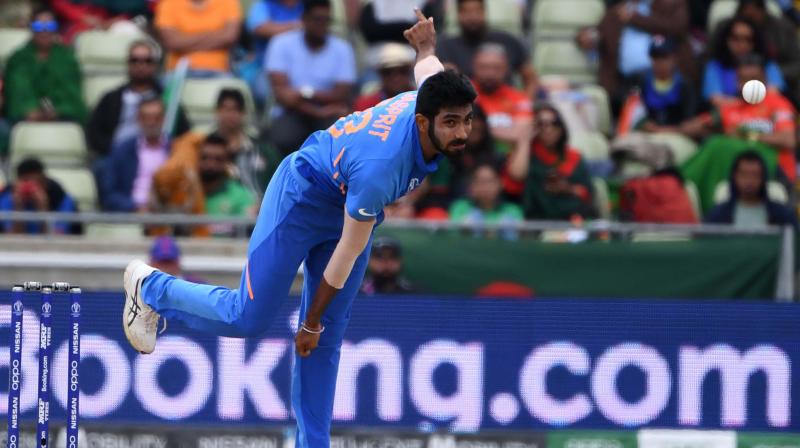 Jasprit Bumrah bowls during the group stage match against Bangladesh.

BIRMINGHAM: Jasprit Bumrah is like an obedient schoolboy. Gentle and soft-spoken, he studiously answers questions at media interactions with an infectious smile. The world’s No.1 bowler is no different on the field. Whenever he is summoned to bowl, he carries out his job quite diligently.

When Bangladesh’s seventh-wicket pair of Sabbir Rahman and Mohammad Saifuddin was threatening to chase down the target at Edgbaston on Tuesday, it was Bumrah who answered captain Virat Kohli’s call by severing the dangerous-looking partnership. In his next over, he polished off the Bangla tail with two consecutive yorkers.

It takes hours of hard work to sharpen the art of unleashing yorkers with razor-sharp precision. And Bumrah does his homework at the nets. “There is always a lot of preparation. When I practice in the nets, I practice each and every situation — whether that is with the old ball, new ball, bowling at the death. All of that helps me when it comes to real situations,” said Bumrah who has taken 14 wickets in seven matches at the World Cup.

The most critical aspect in Kohli’s captaincy is about timing Bumrah’s spells. “His overs were always going to be crucial, so that’s why we stopped him after four initially (against Bangladesh). As a world-class bowler, he just knows what he’s up against. We can look to capitalise on situations where we are in a position to score those extra 30 runs,” said Kohli.

Bumrah’s success can be attributed to his work. “The execution will fall in place. I do it again and again in the nets so the more you do it, the better at it you are. You can’t master it but you can be better at it,” he added.

In a short time, Bumrah has not only grown as India’s bowling spearhead, but also evolved as a key member of the think tank. “When I’m bowling, I like to make my own decisions. I always have a clear plan. If I have the confidence to execute something, so I tell that to the captain or to the senior players that I think this would work and this could work according to my bowling,” said Bumrah who needs just one more scalp to take his 100th ODI wicket.

Does Bumrah feel undue pressure on situations when he is expected to make up for his erring bowling partners? “No, not at all. I know how difficult it is to bowl, especially at the end. You don’t blame anyone, just try to help each other, take everyone together, communicate and calm things,” Bumrah said.

Says no to rest

With a league game to spare, India have already qualified for the semifinals. India can finish on top of the standings by beating Sri Lanka in the last match at Headingley. India might be tempted to rest him, but Bumrah said he would like to play as many games as possible. “This is my first World Cup, so I want to play as many games as possible. The more you play, you enjoy more,” he said.