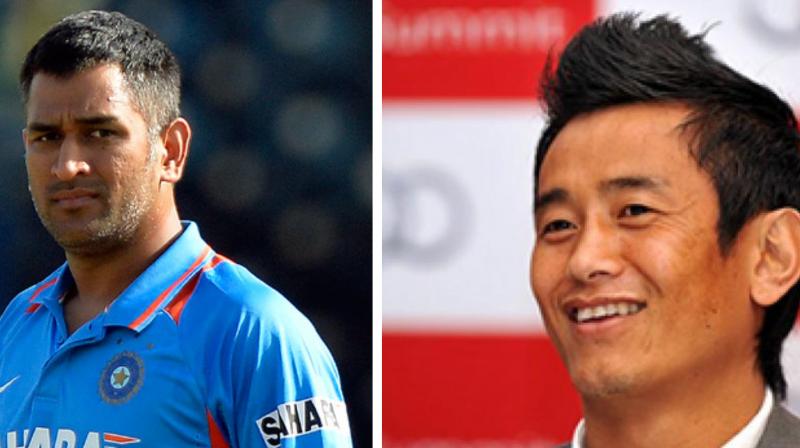 Bhutia also made a sarcastic comment on the standard of competition and said India could still make the semifinals if they send their second or third rung teams. (Photo: AFP)

Kolkata: Former football captain Bhaichung Bhutia Thursday threw his weight behind former cricket skipper Mahendra Singh Dhoni, who is currently facing the ire of fans for his waning finishing ability with the bat.

"I think he has been brilliant. People have been giving stick to him right now as they are just trying to find a scapegoat out of somebody. But if you look at this World Cup, I think he has done pretty well," Bhutia said.

Bhutia also felt the ongoing cricket World Cup is lacking in global appeal, going to the extent of terming it a "South Asia Cup" despite the fact that Australia and England are among the semifinalists.

The quadrennial showpiece in the United Kingdom currently has 10 teams, five of them belonging to Asia with India being the only sub-continent side to seal a semifinal spot.

"I'm finding this World Cup completely 'South Asia Cup'... It's like Pakistan, Bangladesh, Sri Lanka and India only. Another 10 years, you will only see Asian teams with Bhutan and Nepal also qualifying," Bhutia said at the Football Players' Association of India's building here.

Bhutia also made a sarcastic comment on the standard of competition and said India could still make the semifinals if they send their second or third rung teams.

"If we send another three more teams, they will still make the semifinals. India should easily win the World Cup.

"The 'world' feel is missing from the World Cup. You need the flavour of the 'world' thing. There's only one country from Europe, one team from Africa, earlier there used to be Zimbabwe.

"If they don't do it, I think it just going to be Sri Lanka, Bangladesh and India and in few years time you would have Nepal and Bhutan qualifying."

The former India captain is also "bored" of regularly seeing contests between the same teams.

"Before the World Cup, we must have seen India play Australia 10 times. We keep seeing the same contests.

"Look at football World Cup, you would not see Brazil play a team like Holland in five years. If you're not lucky enough, you may not get to see such a contest. In football, fans die to see a contest like Argentina versus Germany.

"But in cricket, you keep seeing the same contests. Even after the World Cup, you may see India take on Australia 10 times. In India, we have no option, so you keep on following the same team and we tend to connect with the team," he said.