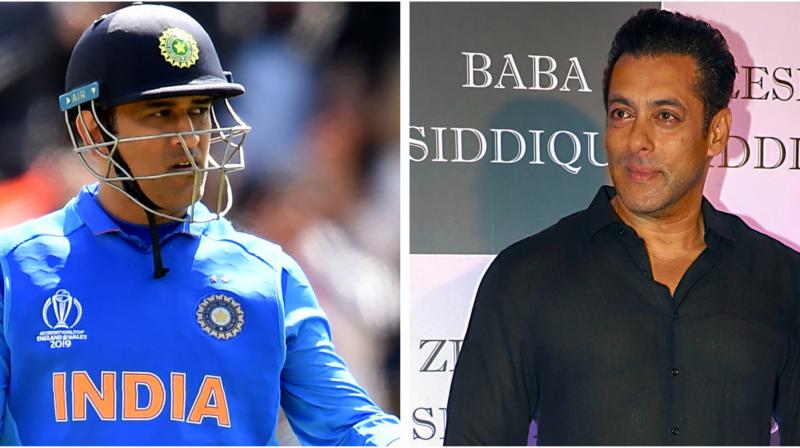 Mumbai: Mahendra Singh Dhoni, a name which says it all. The name defines India’s success at the international cricket scenario.  The 37-year-old has led India to various titles – be it World Cup, ICC Champions Trophy, Asia Cup, ICC T20 World Championship. Dhoni has been played a key part in India’s success.

But, the efforts that he put, has set a benchmark. MS Dhoni surpassed all Indian captains to be called the most successful Indian captain. Dhoni winning shot in the 2011 World final will always be remembered whenever the date April 2 comes.

However, Dhoni toiled enough to become India’s successful captain was showcased in his biopic – MS Dhoni - The Untold Story.

Nonetheless, Dhoni is behind his prime days, but, in terms of wicket-keeping and taking important decisions, no one is better than Dhoni. Dhoni however, in this World Cup has shut his critics by slamming a hundred against Bangladesh in the World Cup warm up.

Recently, bollywood star, Salman Khan, who is an avid fan of Dhoni, has been praising the former Indian captain for guiding India to all the three ICC trophies.

The wanted-actor and his father, Salim Khan have always been a hardcore supporter of the former Indian captain. Ahead of India’s World Cup opening game against South Africa on June 5, the father and son duo are doing the same.

Although, the Bharat-actor in an interview stated that Dhoni will be India’s key to success in the World Cup and said, “I think so (Dhoni is the x-factor for India in this World Cup). Coolness can be misinterpreted sometimes as it doesn’t matter”. But with him, it’s not like that at all. He is very focused. He is very aware of the situation.”

Even the 53-year-old’s father, Salim declared that MS Dhoni’s wicket-keeping abilities keeps him glued to the TV set. Salim gets amazed by Dhoni’s decision making abilities.

This World Cup will Dhoni’s last World Cup and he would like to end his cricketing career on a high note.  Indian skipper, Virat Kohli and India’s spin duo of Kuldeep Yadav and Yuzvendra Chahal have already emphasized the importance of Dhoni’s presence in the Indian team.

Stay indoors and fight the battle for your country better: Pujara