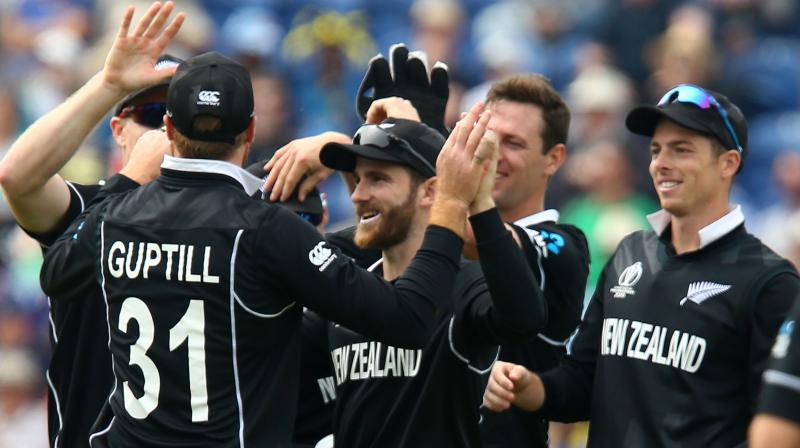 New Zealand takes on Bangladesh in a World Cup match on June 5 at the Oval. (Photo: AFP)

New Delhi: New Zealand and Bangladesh have managed to start their World Cup campaign on a winning note. The Kiwis thrashed Sri Lanka by ten wickets whereas Bangladesh stunned South Africa by 21 runs.

Both these teams would strive to maintain their winning momentum going heading into their second World Cup clash.

The Kiwis are currently ranked at number four position in the ICC ODI team rankings whereas Bangladesh is positioned at number seven.

Here's a look at a few players who can have a match-winning impact in New Zealand vs Bangladesh clash:

Of late, the left-handed batsman has been in the exceptional form for Bangladesh. The player provided quickfire start to the team, giving the much-needed impetus to Bangladesh at the start.

He along with Tamim Iqbal provides the team with a solid foundation. Sarkar scored 42 runs off just 30 balls in Bangladesh's first match in the World Cup against South Africa. The 26-year-old has become a lynchpin of the Bangladesh team and the side's hopes will rely on him in the match against the Kiwis too.

Guptill was the architect of New Zealand's best-ever World Cup campaign in 2015, guiding the team to its maiden tournament final which they eventually lost to Australia by seven wickets.

The New Zealand opener topped the tournament charts with 547 runs at an average of 68.37 and scored unbeaten 237, the highest individual score at the World Cup, in the quarter-finals against West Indies.

Guptill scored 73 runs off just 51 balls in the team's tournament opener against Sri Lanka, allowing the Kiwis to register an easy ten-wicket victory.

The left-arm bowler picked two wickets in a World Cup warm-up match against India, in which he stopped power hitter Hardik Pandya. He scored 75 runs off 84 balls to allow Bangladesh to post their highest ever ODI total of 330 runs against South Africa.

Boult had finished the 2015 edition of the World Cup as the tournament's joint-highest wicket-taker. He has become one of the most successful fast bowlers of New Zealand. Boult has picked up 21 wickets so far this year in bi-lateral series, including a five-for against India, three-wicket haul against both India and Bangladesh.

During the World Cup warm-up matches, he returned with four scalps against both India and West Indies in the first and second practice game, respectively. Boult was not among the wickets for the BlackCaps in the team's tournament opener against Sri Lanka but his ability to swing the ball both ways makes him a vital cog in Kiwi bowling lineup.

New Zealand takes on Bangladesh in a World Cup match on June 5 at the Oval.